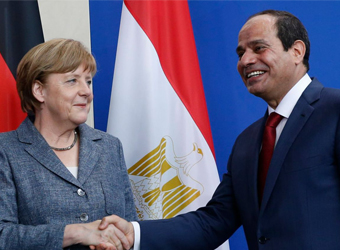 Germany and Egypt have signed three agreements worth €203.5 million ($228.3 million) on Monday.

German Development Minister Gerd Mueller and Egyptian Investment and International Cooperation Minister Sahar Nasr have signed the agreements, at a meeting in Berlin during a visit by Egyptian President Abdel Fattah al-Sisi.

The agreements span a raft of investments in areas of renewable energy, education, small and medium-sized industries, and irrigation.

Minister Nasr told reporters that the first agreement included a €50 million to finance a solar power plant project and a vocational education support programme in Egypt.

The second deal entails a €12 million grant to support Egypt’s dual education system, reform initiatives in favour of the Egyptian public sector as well as micro, small, and medium-sized projects in the country, she added.

As for the third deal, Nasr said it is worth €141.5 million designated to finance four Egyptian projects, including €72 million for the Gulf of Suez wind farm and €11 million for energy efficiency programme. It also involves a €33.5 million agreement with the National Bank of Egypt to encourage SME projects and €25 million for the Egyptian government’s integrated irrigation improvement and management project.

Rasmala plans to increase AUMs in Egypt to 7.5 bln pounds by year-end