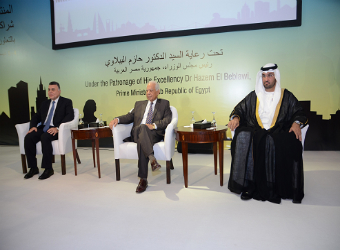 Gulf Arab governments are willing to pour billions of dollars into Egypt to prop up an ally’s economy, but businessmen from the wealthy region are far more wary of a country where they have been burned before.

The oil-producing states, deeply distrustful of Morsi’s Muslim Brotherhood, pledged over $12 billion to help an economy that has been battered by political upheaval since a popular uprising ousted autocrat Hosni Mubarak in 2011.

This week at a Cairo conference designed to lure Gulf investors, officials promised to pay back some of the $6 billion Egypt owes foreign oil firms, reform legislation that hurts investors, and reduce the country’s cumbersome bureaucracy.

For private Gulf Arab investors, whose businesses in Egypt faced legal challenges after Mubarak’s ouster, a return will only come with guarantees that their money will be safe.

Egyptian courts have issued at least 11 rulings since the revolution that toppled Mubarak, ordering the state to reverse deals signed by the former president’s administration.

The lawsuits have been brought by activists and lawyers who alleged that companies were sold off too cheaply in moves representative of the corrupt business practices during the Mubarak era.

Subsequent rulings have plunged a number of foreign companies operating in Egypt into legal limbo, which could scare off much-needed investment from abroad and add to an already difficult business climate.

Many Gulf companies were exposed to the risk of renationalisation.

“We really need to overcome these uncertainties to make meaningful investment in Egypt. I am more optimistic but cautious … They have to act quickly,” said Omar Al-Futtaim, CEO and Vice Chairman of Al Futtaim Real Estate of the United Arab Emirates.

“To attract big investment it’s a need (to have) an attractive environment,… a lot of transparency, especially when it comes to law and regulation, and enforcement of agreements.”

UAE Minister of State Sultan Al Jaber called for the right legal framework to reassure investors who are interested in various sectors including agriculture and energy.

The Egyptian government is preparing a law to reinforce the legal standing of past contracts with the state, but investors say they will not make a move until they see serious progress.

The country’s interim prime minister announced that Egypt has successfully resolved 19 disputes with businessmen and promised to look into the remaining cases.

But concerns are deep-seated.

Eighteen Saudi businessmen, who had met at a Saudi-owned luxury mall in Cairo and drafted a set of demands that all previous contracts be honoured, presented them to interim-President Adly Mansour on Thursday.

Aside from the legal obstacles to investment, conditions on the ground in Egypt remain discouraging, with the possibility that a political roadmap meant to lead to free elections may not be enough to bring stability.

Political upheaval has hammered tourism, a pillar of the economy, and there are no signs that the government and the Brotherhood will reconcile their difference. Since Morsi’s ouster, attacks by Islamist militants on security forces have increased sharply.

The country’s foreign reserves plunged to a low of $13.4 billion in March, compared with $36 billion on the eve of the 2011 uprising.

Gulf states, with the exception of Qatar which supported the Brotherhood, have promised to stand by Egypt.

But the most populous Arab state will eventually come under pressure to find solutions on its own. That will require luring private sector investment.

When an Egyptian delegation visited the UAE in October, Deputy Prime Minister Mansour bin Zayed al-Nahyan said Egypt cannot live on Gulf aid alone and must think of “innovative and unusual ways” to revive its economy.

To encourage action, five Saudi businessmen have set up a company called Furas, Arabic for ‘Chances’, with paid in capital of 10 million Saudi Riyals ($2.7 million) which they intend to increase to 100 million riyals if the Egyptian government meets their demands.

“If the Egyptian government amends its regulations, current investors will increase their investments. But if it does not, we will stay with the same capital that was paid. That’s it, no more,” Bin Mahfouz said, summing up the mood of Gulf Arab businessmen.