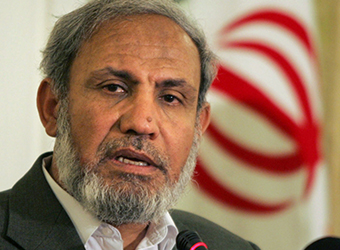 Palestinian Hamas leader Mahmoud El-Zahar said Tuesday that the movement’s relations with Egypt have improved, evidenced by the reaching of an agreement this week on border control between the Gaza Strip and Sinai Peninsula.

El-Zahar said in statements published by El-Ra’i news website, reportedly affiliated with the group, that a delegation of representatives from the group met with Egyptian officials in Cairo this week.

Previous news reports said that the deputy head of Hamas’ political bureau Ismail Haniyeh arrived in Cairo on Monday, on his return from a trip to Doha, to hold meetings with Egyptian officials.

The last official visit of Hamas representatives to Cairo was in March 2016.

Relations between Egypt and the Palestinian Islamic group became strained in the wake of a popular uprising that toppled Egypt’s Islamist ex-president Mohamed Morsi in July 2013.

The Egyptian government has demanded that Hamas sever ties with the Brotherhood, and take steps to prevent cross-border smuggling.

Cairo plays a central role in reconciliation efforts between rival Palestinian factions, as well as efforts to end the ongoing Israeli-Palestinian conflict.

Trump says will absolutely do safe zones in Syria