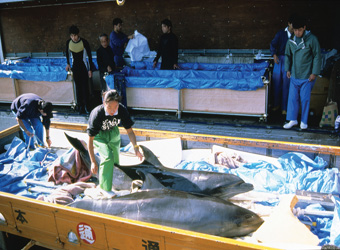 “Since it is believed that transportation of this nature can result in endangering wildlife elsewhere, Hong Kong Airlines will immediately ban shipments of this kind,” the carrier announced in a statement.

Hong Kong Airlines came under pressure from the public after an internal memo was leaked, stating the carrier had transported five live dolphins from Japan to Vietnam on January 16, earning the company HK$850,000 (US$110,000) in cargo revenue.

The memo also included a photograph of the dolphins lying in shallow, narrow containers — which China Daily dubbed “flying coffins” — inside the Boeing 733F cargo aircraft.

In a previous statement responding to outrage from conservation groups, Hong Kong Airlines said that it was “totally unaware of the complexities” surrounding the “dark side of the dolphin story.”

The carrier’s most recent dolphin flight took off from Osaka, leading to speculation that the dolphins were captured in Taiji, scene of an annual dolphin slaughter depicted in the Oscar-winning documentary “The Cove.”

Hong Kong Airlines refused to disclose where the dolphins came from or their destination.

The dolphin flight reportedly made a stopover in Hong Kong and a spokesperson for the Agriculture Fisheries and Conservation Department confirmed that they were aware of the dolphins’ transportation in advance but did not carry out any inspection.