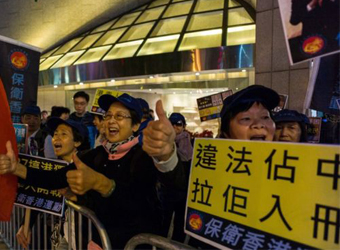 Voting is under way in Hong Kong in elections for the territory’s Election Committee, the panel that selects the next leader.

Only 6% of Hong Kong’s voters can take part and those who are allowed to cast ballots are seen as mostly pro-China.

The vote is widely criticised as undemocratic but pro-democracy groups are putting forward more candidates than ever before.

They say they disagree with the system but hope to fight it from the inside.

The BBC’s Helier Cheung in Hong Kong says the vote comes at a tense time for the former British colony.

Hong Kong was handed back to China in 1997 under an agreement that it would enjoy special rights and freedoms.

But activists now accuse China of meddling in Hong Kong’s affairs, she says.

The government has taken several pro-democracy lawmakers to court, saying that they should be disqualified.

He has often been accused by pro-democracy campaigners of putting China’s interests above those of the people of Hong Kong.

In 2014, two years after Mr Leung took office, massive pro-democracy rallies in Hong Kong failed to win any concessions from him or from China.

Samsung to disable Note 7 phones in the U.S. via software update