Huawei blacklisting can cause harm to consumers, businesses in Europe:Ken Hu

Tech newsInvestment
By Amwal Al Ghad English On May 26, 2019
Share

Huawei’s Deputy Chairman Ken Hu speaking at the Potsdam Conference on National Cybersecurity in Germany said that the company’s blacklisting “set a dangerous precedent,” one that disrupts the global supply chain and fair competition.

He said “In recent days, restrictions, based on ungrounded allegations, have been imposed on Huawei in order to disrupt our business operations. We believe this behavior is totally unjustified.”

He further noted that in Europe, approximately three-quarters of smartphone users rely on an Android-based phone. Huawei accounts roughly for 20% of this market. Such reckless decisions can cause a great deal of harm to consumers and businesses in Europe.

Hu drew parallels between the company’s trade woes and the Berlin Wall, which once ran near Potsdam.

He  added that “I am honored to speak at this beautiful campus of the University of Potsdam. When I arrived earlier, I was told that we are at a historic site where the Berlin Wall once stood. This reminded me of the fact that we don’t want to see another wall and we don’t want to go through another painful experience. 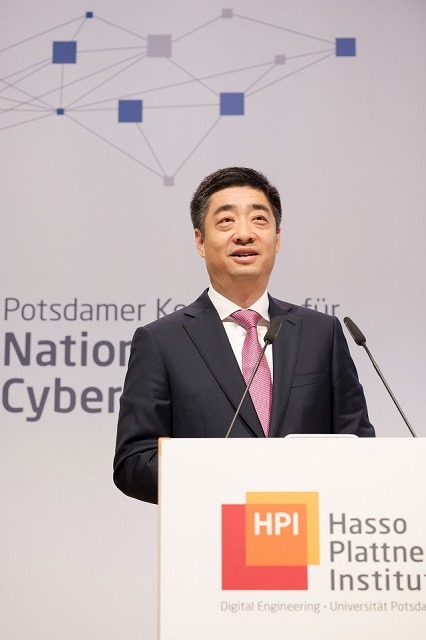 His talk follows a turbulent week for the technology titan. Last Thursday, the U.S. added Huawei to a trade blacklist as part of a growing effort to “secure the information and communications technology and services supply chain,” as President Trump’s Executive Order noted at the time. While this has led to a number of chip companies — in the U.S. and further afield — ceasing trade with Huawei, it also means that Google will no longer be able to offer Huawei its own Android services.