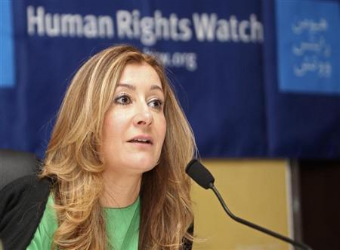 Human Rights Watch has denounced on Saturday the arrest of a prominent Egyptian activist during a raid by security forces on a domestic human rights organisation, which it described as a continuation of a crackdown on dissent.

Police broke into the offices of the Egyptian Centre for Economic and Social Rights late Thursday and arrested six of its members who were blindfolded and detained in an undisclosed place for nine hours. Five of them were later released.

Mohamed Adel, a founding member of the April 6 movement that contributed to the 2011 revolt against Hosni Mubarak, remains in custody.

Police have in the past three weeks also gone after three other prominent activists of the Egyptian protest movement; Alaa Abdelfattah, Ahmed Maher and Ahmad Douma.

The police have used the new, deeply repressive, Law 107 of 2013 on the Right to Public Meetings, Processions, and Peaceful Demonstrations, to arrest scores of political activists on grounds that they failed to seek advance permission for their demonstrations, Human Rights Watch said. The government claims that, instead of criminal penalties, the new law sets fines – of 10,000 – 30,000 Egyptian Pounds (US$ $1,500 – 4,300) under article 21– for failing to get advance permission. Yet the new law incorporates the existing restrictive assembly laws, including Law 14 of 1923, which carries with it a prison sentence for participation in an unauthorized demonstration.

Sarah Leah Whitson, the Middle East and North Africa director at HRW, said the pursuit of the activists is a deliberate effort to target “voices who demand justice and security agency reform”.

“It should come as no surprise that with the persecution of the Muslim Brotherhood well underway, the Ministry of Interior is now targeting leaders of the secular protest movement,” Whitson said in a statement released on Saturday.

“The Egyptian government has sent a strong signal with its attack on a human rights group, and these arrests and prosecutions, that it is not in the mood for dissent of any kind,” Whitson said.

“Almost three years after the nationwide protests that brought down Hosni Mubarak, security agencies feel more empowered than ever and are still intent on crushing the right of Egyptians to protest the actions of their government.”

Raid on the Human Rights Organization
At 12:15 a.m. on December 19, about 50 armed police officers from Abdin and Azbakia police stations and the National Security Agency surrounded the building where the Egyptian Center for Economic and Social Rights (ECESR) is based in downtown Cairo.

Human rights lawyer Mahmoud Belal told Human Rights Watch he was heading to the office late to prepare for a planned news conference on steel worker rights the next day, when the police blocked his access to the building. He said that he saw the police roughly bringing five of his colleagues down the stairs. When he objected and asked to see their arrest and search warrant, the police slapped and arrested him along with the other five. The group’s director, Nadim Mansour, told Human Rights Watch that police seized three computers during the raid.

One of those arrested, Mostafa Eissa, a filmmaker, told Human Rights Watch that the police then drove them to a place they could not identify, blindfolded them, and made them stand for nine hours. Human rights lawyer Malek Adly said that he and other human rights lawyers went to the Azbakia and Abdin police stations to look for the detainees, and that police officers told them to “check with National Security,” the secret police division of the Ministry of Interior which is not authorized to detain people.

Among those arrested in the raid was Adel, the April 6 leader who is currently on trial in connection with a protest on November 30, and who is a volunteer for the human rights group. The police had not previously detained him despite a warrant for his arrest. This apparently was the pretext for the raid, but the Ministry of Interior did not explain why they carried out the raid at the organization’s office rather than Adel’s home; why they detained the other staff members; or why they seized the computers.

The police released the other five at 9 a.m. but continued to hold Adel. Mansour told Human Rights Watch that the police returned the seized computers the following morning.

The rights group, founded by a former presidential candidate, Khaled Ali, is one of the most active Egyptian human rights groups. It has defended workers’ rights, litigated against the government on economic and social rights issues, and provided legal aid to protesters. It has also documented police killings of protesters through its project, Wikithawra, which lists the names and numbers of people the police have arrested and killed over the past two years.

With Adel’s arrest, the number of prominent political activists arrested by Egypt’s security forces in the past three years has risen to a total of five.

Ahmed Maher, founder of the April 6 youth movement and a 2011 nominee for the Nobel Peace Prize, is among those put in jail since the government passed a law outlawing the calling for protests without first attaining approvals from the Ministry of Interior.

Along with Adel, Maher and activist Ahmed Douma are on trial on charges relating to a protest on November 30, with a verdict scheduled for December 22.

Prosecutors also recently referred Alaa Abdelfattah, one of the most vocal critics of the police and the military, to trial on charges of organising a demonstration without notification.

Human Rights Watch accused the police of using “the deeply repressive” law to arrest scores of political activists on grounds that they failed to seek advance permission for their demonstrations.

“The government claims that, instead of criminal penalties, the new law sets fines – of 10,000 – 30,000 Egyptian Pounds (US$ $1,500 – 4,300) under article 21 – for failing to get advance permission,” the HRW statement said, adding: “Yet the new law incorporates the existing restrictive assembly laws, including Law 14 of 1923, which carries with it a prison sentence for participation in an unauthorised demonstration.”