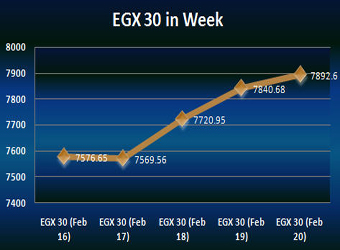 In a week, Egypt’s stock exchange resumed its rally once again to attain gains totalling 14.6 billion Egyptian pounds. The country’s main stock index – EGX30 surged to near 7890 points, a level not seen since mid-2008, coinciding with Beltone Financial’s forecasts made last Tuesday that the rally will continue towards 7900-8000 points.

The Egyptian Exchange’s benchmark index EGX 30 index jumped by 3.9% this week, registering a surge of 301.89 points, ending Thursday’s transactions at 7892.6 points compared to 7590.71 points at the end of a week earlier.

The main gauge index registered its highest point on Thursday closing at 7892.6 points, where its lowest point recorded on Monday at 7569.56 points.

Furthermore, the market capitalization closed at EGP 485.221 billion last Thursday, compared to EGP 470.653 billion at the end of a week earlier.

Commenting on EGX30’s significant rally, the Financial Times issued a report on Tuesday saying: “Who says military rule is bad for stock markets? The EGX30, Egypt’s main stock index, is now over 7,700 – a level not seen since mid-2008.”

“The index has surpassed the previous post-Lehman high before the removal of president Mubarak, which was just over 7,600 in April 2010.” The report said

“The pre-Lehman peak of nearly 11,000 is still some way off. And the last time the index was at this level, it was on the way down, not up, of course. But it’s still another milestone.”

Telecommunications was the most active sector through last week, recording a volume of trades of 299 million securities worth EGP 535 billion.

Real Estate reported third, with a volume of trades of 220 million securities worth EGP 944 million.

Travel & Leisure sector was on the fourth position, getting a volume of trades of 148 million securities worth EGP 336 million.

Industrial Goods and Services and Automobiles reported sixth, having a volume of trades of 91 million securities worth EGP 223 million.

Construction and Materials was on the seventh position, with a volume of trades of 61 million securities worth EGP 301 million.

Food and Beverage reported eighth, attaining a volume of trades of 32 million securities worth EGP 224 million.

Healthcare and Pharmaceuticals was on the ninth position, with a volume of trades of 16 million securities worth EGP 32 million.

At the bottom of the list, Chemicals reported twelfth getting a volume of trades of 4.5 million securities worth EGP 58.9 million.

Local investors led the market activity all through the week with 87.77%, followed by Foreign and Arab investors with 6.23% and  6%, respectively.

Foreign investors were the most active buyers during the week earning the value of EGP 51.33 million , after excluding the deals.

Arab investors were also to buy by value of EGP 49.42 million, after excluding the deals.

Moreover, institutions seized 44% of total trading through the week; while individuals attained 56.00% . Institutions were the most active buyers during the week earning the value of EGP 197.28 million, after excluding the deals.

The UK paper further referred the strange thing is that Egypt isn’t exactly in great shape. General Sisi, who is likely to run for president in elections later this year, is something of an unknown quantity. And although the violence and unrest has calmed down, the deadly attack on a bus carrying tourists last weekend was a reminder that it is not that far away.

Rating agency Fitch may have put the country on a “stable” footing in its recent sovereign review, but the economy is still sluggish, it noted. Growth remains far below the rates needed to bring the unemployment rate down. Capital Economics pointed out in a note on Tuesday that GDP of around 4.5 per cent is needed to reduce the jobless rate, whereas current growth is around 2 per cent.

But still the market rises, up 70 per cent since the coup that removed Mohamed Morsi in 2013.

The question is, who is driving the rally? Up until now, it has been mainly local investors, who are encouraged by the relative political stability, as well as the financial support from the Gulf.

Simon Kitchen, strategist at EFG-Hermes, the Cairo-based regional investment bank, says that the billions from the Gulf states has pushed interest rates on the Egyptian pound lower, so some money is switching from local government treasury bills to equities. “Financial support has smoothed over some of the worries,” he says.

However, Kitchen suggests that the new-found confidence in local portfolio managers has yet to catch on with foreign investors. “They are comfortable with [the idea of] a cyclical recovery, but there is still the problem of repatriating foreign currency.”

And the de facto capital controls also act as another spur to Egyptian investors to put money into equities, as it is hard for locals to get foreign currency.

So will the rally continue? Without any major upheaval or political shocks, local investors could push prices up further.

But as Kitchen says: “for a sustained rally, you need to see foreign money come in. We are not seeing that right now.”

Suez Canal Insurance Plans to Boost its Capital to EGP60m