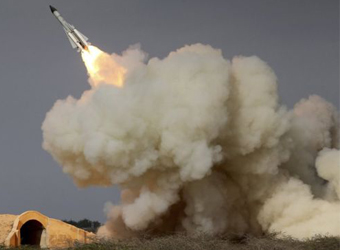 The strikes are the first time Iran has fired missiles at another country in three decades and represent a major escalation of Iran’s role in the war in Syria.

The operation “targeted Takfiri forces in the Deir Ezzor region in Eastern Syria.”

Six assailants killed at least 16 people at Iran’s Parliament building and a shrine dedicated to the republic’s revolutionary founder Ayatollah Khomeini. The attacks marked the the first time that ISIS, a Sunni Muslim group fighting Iranian-backed militias in Syria, has claimed responsibility for an attack in Iran.

Iran backs Syrian President Bashar al-Assad in his fight against anti-government rebel groups and ISIS, which is primarily based in the Syrian city of Raqqa.

“The selection of targets is interesting. They say they are firing at the same people who planned the attacks in Tehran but it also bolsters the Syrian army effort right now.”

Amir Daftari, a CNN producer in Tehran, said that Iran hadn’t hidden its support for Assad “but up until now they’ve led us to believe that they’ve provided things like military advisers, volunteers and money.”

The IRGC had vowed revenge for the Tehran attacks and accused Saudi Arabia of supporting ISIS in the operation.

Shiite-majority Iran and Sunni-majority Saudi Arabia have long been embroiled in a sectarian feud.

The rivals are on opposite sides of violent conflicts in Syria, Yemen and most recently Iran has come to the support of Qatar after Gulf countries placed a diplomatic blockade on the country, accusing it of supporting terrorism.

Flynn does not disclose meetings in Middle East