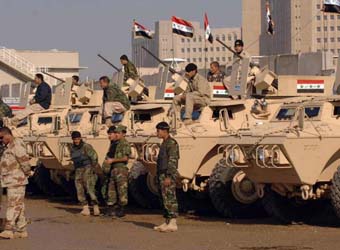 Iraqi Prime Minister Haider Al-Abadi ordered the suspension of military operations in areas disputed with the country’s Kurdish minority, the first signal of a rapprochement since their vote for independence last September.

The 24-hour ceasefire will allow a joint Iraqi and Kurdish team to deploy federal Iraqi forces to the areas, Abadi said in a statement Friday on Twitter. The decision would “prevent confrontation and bloodshed between the sons of a single nation,” Sumaria TV cited Abadi’s office as saying.

More than 90 percent of Iraqi Kurds voted for independence in the non-binding referendum, which was fiercely opposed by Baghdad as well as neighboring countries such as Turkey and Iran, fearing it could embolden their own Kurdish minorities. The federal government sent troops this month to retake disputed areas that Kurdish Peshmerga fighters had seized in 2014 after Islamic State routed Iraqi forces, including the oil-rich city of Kirkuk.

“We are at the very beginning of a serious negotiating process,” said Sami Nader, head of the Beirut-based Levant Institute for Strategic Affairs, adding that the decision is in line with calls by the United Nations to reach an agreement. “Abadi can now capitalize on his gains in future elections, he protected the constitution and the integrity of Iraq.”

Abadi this week demanded the annulment of the independence vote, after the Kurdistan Regional Government said it would be prepared to freeze the result in exchange for an immediate ceasefire and talks with the central government “on the basis of the constitution.”

“As Iraq and Kurdistan are faced with grave and dangerous circumstances, we are all obliged to act responsibly in order to prevent further violence and clashes,” the KRG said. “Certainly, continued fighting does not lead any side to victory, but it will drive the country towards disarray and chaos, affecting all aspects of life.”

The clashes have disrupted output at some of Iraq’s northern oil fields, including the giant Kirkuk reservoir, reducing exports. Oil market participants were keeping watch on the latest developments for signs of whether exports from northern Iraq and Kurdish regions, now at about half normal levels, would rise or fall.

Earlier Friday, the U.S.-led international coalition against Islamic State issued conflicting statements on whether hostilities had halted between Iraqi and Kurdish forces. It called on all sides to refocus on defeating the militant group.