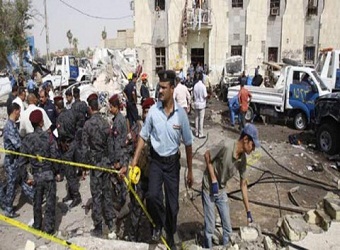 Peering through a lookout hole at the Mosul frontline on Tuesday, Iraqi soldiers attacked the last remaining patch of land controlled by Islamic State in the city’s historic center.

Just steps away in no-man’s land stands the stump of the Hadba minaret, which towered above the city for 850 years until the militants rigged it with explosives and razed it to the ground last week.

Getting this deep into Mosul’s Old City means soldiers from the Counter Terrorism Service (CTS) must dismount from their armored Humvees and walk for 10 minutes down a maze of narrow alleyways which at some points are barely wider than a man.

They climb through holes knocked into walls, entering abandoned homes and courtyards where detritus and concrete rubble is piled up at every turn.

Construction is so dense here that vehicles cannot pass and air strikes would likely cause too much collateral damage. The battle to retake Islamic State’s de facto capital in Iraq has come down to a band of soldiers with assault rifles maneuvering on foot through the dusty heart of the city.

Heavy fighting in close quarters between the elite troops and Islamic State’s most hardened fighters has left the Old City so damaged that it is often hard to tell the difference between what constitutes indoors and outdoors.

Iraqi forces stormed the Old City, the ultimate target of an eight-month-old campaign to capture Mosul, nine days ago. On Monday they captured the neighborhood of al-Faruq, facing the Hadba minaret and the adjoining al-Nuri mosque, and on Tuesday they retook al-Mashahda neighborhood, the military said.

Like the historic districts of great Arab capitals such as Cairo and Damascus, Mosul’s Old City holds market stalls, a few mosques and churches, and small houses built and rebuilt on top of each other over the ages.

Most of its stone structures date from the medieval period, but some are older. Modernization initiatives and long neglect had caused significant damage before Islamic State took over, yet the 150-foot (45-metre) leaning Hadba minaret had survived as an icon of the city.

Iraq’s prime minister has said its destruction amounted to an acknowledgment of defeat by Islamic State. The group’s leader Abu Bakr al-Baghdadi made his only confirmed public appearance in the mosque three years ago to declare the establishment of a modern-day caliphate which is now crumbling.

He has left the fighting in Mosul to local commanders and is believed to be hiding in the Iraq-Syria border area, according to U.S. and Iraqi military sources.

The Iraqi military estimates up to 350 militants are besieged in the remaining parts of the Old City, dug in among civilians in crumbling houses and making extensive use of booby traps, suicide bombers and sniper fire to slow the troops advancing from west, north and south.

More than 50,000 civilians are trapped behind Islamic State lines with little food, water or medicine, according to those who have escaped. None were visible on Tuesday in government-controlled parts of the Old City.

Only a handful of neighborhoods remain outside the control of Iraqi forces, and while authorities expect the offensive to end in the coming days, their advance remains arduous.

In the courtyard of a dilapidated home, a soldier launches a white commercial drone. As it buzzes skyward, officers gather on a couch to inspect enemy defenses on the transmitted video feed.

Soldiers, who dash through alleys blocked up precariously with stones and furniture, said snipers and suicide bombers remained the primary resistance from Islamic State. They chat with each other about how to adjust to fighting more from outside their Humvees.

“The blocks in this area are uneven, so it’s not a direct confrontation,” said one soldier. “Sometimes they jump out from around a corner.”