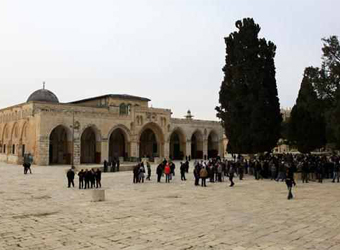 Israel will not remove metal detectors whose installation outside a major Jerusalem mosque (Al-Aqsa Mosque) has triggered the bloodiest confrontations with the Palestinians in years, but could eventually reduce their use, Israeli officials announced Sunday.

With Israeli generals warning the violence may spiral, Prime Minister Benjamin Netanyahu is considering alternatives to the walk-through gates placed at entrances to al Aqsa mosque compound after two policemen were shot dead there on July 14.

But the rightist Netanyahu government is wary of being seen to capitulate to Palestinian pressure at the site, which Jews revere as the vestige of their two ancient temples and which was among East Jerusalem areas Israel captured in a 1967 war and annexed as its capital in a move not recognized internationally.

“They (metal detectors) will remain. The murderers will never tell us how to search the murderers,” Tzachi Hanegbi, Israeli minister for regional development and a senior member of the ruling Likud party, told Israel’s Army Radio.

Incensed at what they perceive as a violation of delicate decades-old access arrangements at Islam’s third-holiest site, many Palestinians have refused to go through the metal detectors, holding street prayers and often violent protests.

Oil market rebalancing to speed up in H2: OPEC’s Barkindo

Britain needs transitional deal with EU, to end before next election: trade minister