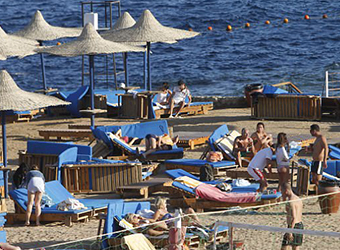 Israeli tourists in Sinai ignored their government’s warning against traveling to the Egyptian peninsula and continued bookings for the Easter Holiday, the Independent newspaper website reported.

The Israeli authorities called on Israelis to leave Sinai immediately.

“Travel agencies in Tel Aviv and Eilat are continuing to sell trips to the region. Fun-Time Tour & Travel in Eilat offers a one-day tour to St Catherine’s Monastery for the equivalent of £108, with an extra cash payment of US$77 (£62) for fees at the border crossing,” the Independent said.

“Some people are going… We don’t usually have any problems,” a sales agent at Bein Harim Travel in Tel Aviv told the Independent.

Sharm el-Sheikh is still the favorite destination of Israeli and British tourists, despite the suspention ofb UK direct flights to the resort since 2015.

The Independent reported that the U.S. embassy allows its employees to travel to Sharm el-Sheikh by air, but not by land.

Israel’s Counter-Terrorism Bureau urged its citizens on Monday not to travel to Egypt’s Sinai, calling on holidaymakers currently there to leave immediately, citing terror threats by the Islamic State (IS) militant group that may be targeting Israelis.

In a statement issued by Israel’s Anti-Terrorism Directorate, Israel said that this is a Level 1 alert that is based on reliable information obtained by intelligence, and related to a very high concrete threat.

“All Israelis currently in Sinai should return … We also strongly advise that those wanting to travel to Sinai should not do so,” the directorate wrote in the statement.

“Islamic State and those inspired by it are at the forefront of global jihadi groups that are highly motivated to carry out attacks during this period,” said the statement issued on Monday.

The alert was issued right ahead of the Passover holiday, when droves of Israelis holidaymakers usually cross the border into Egypt’s Sinai Peninsula to visit resorts and beaches on the Red Sea every year.

Northern Sinai, not southern Sinai, where the majority of resorts and beaches are located, has been the site of numerous clashes between the Egyptian army and militants affiliated to the IS group.

IS has been holding its operations in the North Sinai governorate, however, the statement issued by Israel held a general warning, not specifying which part of the Sinai the threat is targeting.