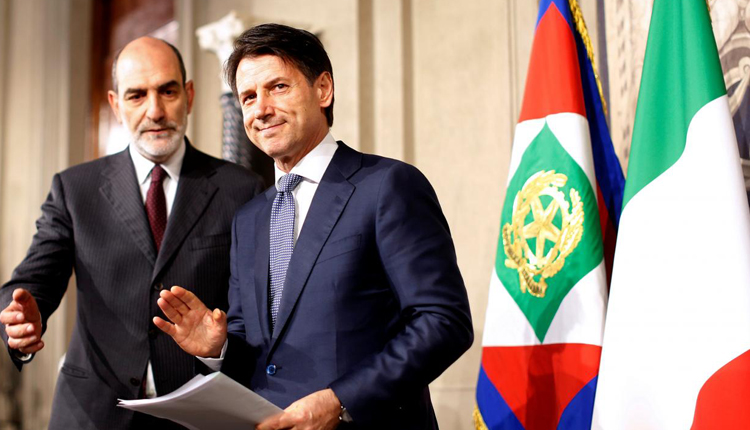 President Sergio Mattarella on Wednesday gave political novice Giuseppe Conte a mandate to lead the first government in Italy made up of anti-establishment parties that have vowed to shake up the European Union.

Conte, a little-known Florence law professor, said he would need a few days to draw up a list of ministers for his administration, which will be backed by the radical 5-Star Movement and far-right League.

“I’m preparing now to defend the interests of all Italians in all places, in Europe and internationally,” Conte told reporters after holding two hours of talks with Mattarella. “I will be the defense lawyer for the Italian people.”

Italy has been deadlocked since an inconclusive election in March. After weeks of fruitless talks between the various parties, 5-Star and the League finally agreed to a government pact last Friday, promising to hike taxes and jack up spending.

exceptionally weak leader who will have little influence over his coalition partners.

Volatile Italian markets saw renewed selling pressure on Wednesday over fears the League/5-Star program would led to a spending spree that would endanger the country’s heavily indebted accounts and spark a showdown with the EU.

Italy’s 10-year bond yield, a gauge of political risk, hit a 14-month high, while the cost of insuring exposure to Italian debt rose to a 1-year-high.

5-Star and the League told Mattarella on Monday they wanted Conte to become premier. Instead of immediately accepting their recommendation, the president has taken his time amid concerns over Conte’s lack of experience and suggestions he inflated his academic resume in an effort to boost his international profile.
RISK FEARS

The European Commission warned on Wednesday that Italy’s financial stability was at risk from possible interest rate increases and political worries.

“Given its systemic importance, Italy is a source of potentially significant spillovers to the rest of the euro area,” the EU executive said in an annual set of economic policy recommendations to Italy and the other EU member states.

Powerful Italian business lobby Confindustria also raised the alarm, saying the nascent government had to show it had a plan to cut the country’s debt pile, the second highest in Europe in relation to output after that of Greece.

But Conte, in his first words since receiving his mandate, suggested his initial priority would be European reform.

“The government must immediately contend with ongoing negotiations over the European budget, the reform of asylum law, and the completion of the banking union,” he said.

“It’s my intention that the direction we take must reflect national interests.”

After accepting Conte, Mattarella might now put up a fight over the choice of economy minister.

The League has said it wants an 81-year-old eurosceptic economist Paolo Savona to take the position — a suggestion that has added to market alarm over where Italy might be heading.

Savona has called Italy’s entry into the euro zone a “historic error” and wants a “plan B” to be drawn up to allow it to leave the currency bloc if it should prove necessary.

However, a source who has spoken to Mattarella about the eventual government line up, told Reuters the head of state was unhappy about having a eurosceptic as economy minister.

“Savona’s name has not been officially put to the (president),” said the source. But “certain economists with anti-euro and anti-European profiles are not appreciated”.

The president has power of veto over government ministers.