Japanese shares in the red as yen strengthens 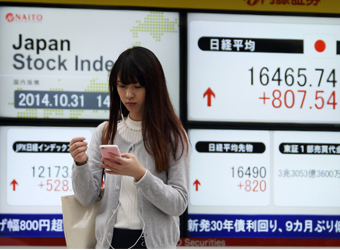 Japanese shares fell as dollar/yen slipped to a one-month low, after President-elect Donald Trump held a raucous and freewheeling press conference that analysts said was sparse on economic policy details.

The news conference held on Wednesday during U.S. time concluded with Donald Trump, who will be inaugurated as the 45th President of the United States on Jan. 20, not providing further clarity on his proposed policies which had drove U.S. markets and the dollar higher since November.

“Trump made a couple references to ‘making America great again’ but there was no detail on infrastructure spending, corporate tax reform, personal income tax cuts, the prospects for deregulation or the possibility of another tax repatriation holiday,” said Westpac Global Strategy Group in a note released on Thursday.

The Nikkei 225 dropped 0.89 percent, as the yen strengthened against the dollar to 114.62 compared to levels as high as 116 in yesterday’s session. A stronger yen is generally bad news for Japanese companies as it makes exports more expensive and lowers repatriated profits earned overseas.

Japanese condiments manufacturer Kewpie added 5.26 percent, after the company said it expects operating profit to rise 10.7 percent to 33 billion yen ($287 million) for the full year ending November and that it will increase the dividends by 1.5 yen per share compared to the previous year to 36 yen each.

Samsung Electronics was up 0.21 percent while Samsung C&T traded unchanged as investors shrugged off news that Samsung Group chief Jay Lee arrived at the South Korean special prosecutor’s office for questioning over a corruption scandal which has engulfed South Korea, and resulted in the impeachment by parliament of President Park Geun-hye.

Over in mainland China, the Shanghai composite was nearly flat, up 0.05 percent, while the Shenzhen composite was down 0.118 percent.

The dollar index, which measures the greenback against a basket of six major currencies, last traded at 101.49, falling as low as 101.28 overnight in reaction to Trump’s news conference.

“The U.S. dollar rally was based on the assumption Trump’s administration will push through a massive infrastructure building and fiscal stimulus package, which will lead to higher inflation in the future,” said Margaret Yang, market analyst at CMC Markets, in a note on Thursday. The dollar-index has risen nearly 3 percent since Trump was announced the election winner.

“That assumption is now unwinding, because the president-elect did not even mention the key word ‘stimulus,'” she added.

The Australian dollar was stronger against the greenback, at $0.7456.

Oil prices had jumped more than 2.5 percent on Wednesday during U.S. house, as the dollar weakened after Trump’s news conference and on news that Saudi Arabia cut exports to Asia.

Dollar slumps after Trump offers no details on economic policies