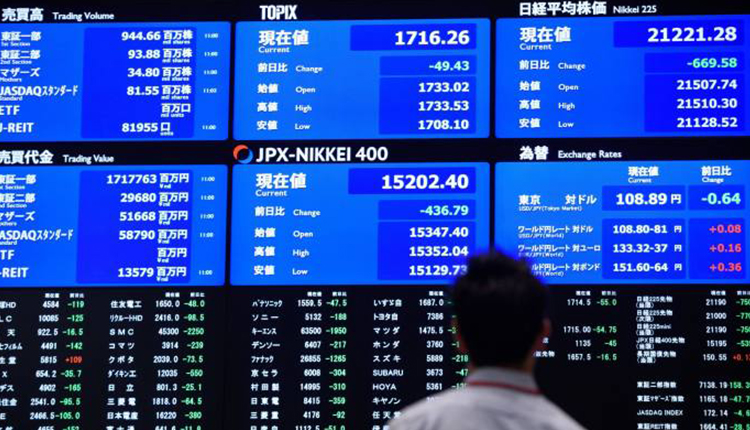 Asian Pacific stocks fell on Monday as the number of coronavirus cases globally continues to rise.

In Japan, the Nikkei 225 fell 2.3 percent on the day to 21,995.04 as shares of index heavyweight Fast Retailing and conglomerate Softbank Group dropped more than 2 percent each.

Hong Kong’s Hang Seng index dropped 1.24 percent, as of its final hour of trading, with shares of life insurer AIA down 3.1 percent.

On the economic data front, retail sales in Japan dropped 12.3 percent year-on-year in May, according to the country’s Ministry of Economy, Trade and Industry. That compared against a median market forecast of a 11.6 percent decline, according to Reuters.

Investors continued to monitor developments surrounding the global coronavirus pandemic amid concerns that a surge in cases could impact the reopening of economies. Globally, more than 500,000 lives have been taken by the coronavirus as the number of infections crosses 10 million, according to data compiled by Johns Hopkins University.

In the U.S., coronavirus cases recently surged by more than 45,000 in a day, according to John Hopkins University data. The recent spike in cases stateside has led some states such as Texas and Florida to re-close some businesses.

“The hardest hit US states have delayed further reopening of their economies.  Some cities or states may take the further step of reimposing shutdowns or other restrictions to slow the spread of the virus and limit the pressure on health services.  The more stringent and widespread the restrictions, the slower the US economic rebound,” analysts at Commonwealth Bank of Australia wrote in a note.

“A double‑dip US recession is possible if widespread restrictions are reimposed, leading to a surge in the (U.S. dollar),” the analysts said. Still, they mentioned that daily consumer spending in the virus-hit states “continues to recover despite surging infections.”

The U.S. dollar index, which tracks the greenback against a basket of its peers, was last at 97.176 after rising from levels below 97 last week.

The Japanese yen traded at 107.15 per dollar seeing sharp moves between levels below 106.8 and above 107.2 against the greenback last week. The Australian dollar changed hands at $0.6881 after touching an earlier low of $0.6842.