Launching U.S-Colombia Trade Deal in May 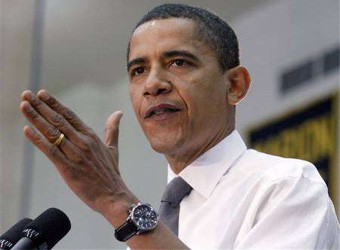 The U.S.-Colombia free trade agreement will enter into force next month, far earlier than expected, as a result of what the Obama administration called “historic” progress for Colombian worker protections and human rights.

The announcement came during the Summit of the Americas in Colombia, where President Barack Obama has been meeting regional political and business leaders including Colombian President Juan Manuel Santos to push for greater access for U.S. exports.

U.S. Trade Representative Ron Kirk told reporters in the Caribbean resort of Cartagena that the trade deal Obama signed in October would be implemented on May 15, months ahead of what most trade watchers had anticipated.

“We believe this is a very historic step,” Kirk said.

An elated Santos said free trade with the United States had been a Colombian dream for 20 years that has finally come true.

“This will create thousands, millions of jobs in the United States and Colombia,” he said at a news conference with Obama.

Colombia’s weak labor record, including murders and attacks on union activists that were not investigated, had held up the free trade pact with the United States for years.

Politically powerful U.S. union groups like the AFL-CIO had opposed the deal – which was largely negotiated under former President George W. Bush – on the grounds that Colombia lacked the capacity to enforce worker protections.

On Sunday, Obama administration officials said Colombia’s creation of a new labor ministry, prosecution of crimes against union workers and steps to fight discrimination against Afro-Colombians and women had assuaged its concerns and made it possible to implement the trade deal.

Labor Secretary Hilda Solis told reporters U.S. officials had been working closely with Colombia on labor rights issues over the last year and the United States believes there has been “remarkable progress.”

“However, we do know that there still remain challenges,” she said.

Colombia already has duty-free access to the United States for most goods under longtime U.S. trade preference programs. When implemented, the deal will eliminate most of the duties Colombia now imposes on American farming and manufactured goods.

The U.S. Chamber of Commerce welcomed the news of the May 15 implementation which it said “opens the door to new business opportunities, economic growth, and job creation,” noting U.S.-Colombian trade was already worth $14 billion last year, as Reuters stated.

Republican Congressman Dave Camp, chairman of the powerful Ways and Means committee, called the agreement to quickly put the deal in place a “cause for celebration.”

“We regret that the administration has placed commercial interests above the interests of workers and their trade unions,” he said

Oracle and Google To Meet in “World Series” of IP Lawsuits