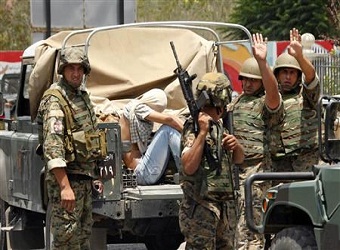 Lebanese soldiers fought Sunni Islamist gunmen in the southern city of Sidon for a second day on Monday in one of the deadliest outbreaks of violence fuelled by sectarian rifts over the civil war in neighboring Syria.

The Lebanese army entered a mosque complex to the east of the ancient Mediterranean port city, where hardline Sunni cleric Sheikh Ahmed al-Assir was believed to be sheltering with his supporters, a Lebanese security source said.

He said that the army had been preparing to sweep buildings and capture the remaining militants on Monday afternoon and at around 3 p.m. (7:00 a.m. EST) the sound of gunfire could be heard inside the complex.

The army said 12 soldiers had been killed in clashes which broke out on Sunday after security forces detained one of Assir’s followers. His supporters retaliated by opening fire on an army checkpoint.

The army pledged to crush Assir’s forces, accusing them of trying to plunge Lebanon into a repeat of its 1975-1990 civil war. Contagion from the Syrian conflict has already exploded in deadly street fighting in the northern city of Tripoli and rocket attacks in Beirut and the Bekaa Valley.

“We affirm to all Lebanese that the army is determined to eradicate strife, and will not halt its military operations until security is completely restored to the city,” the army said in a statement on Monday.

Security sources put the army death toll at 17, with 65 wounded. It was not possible to verify casualties among Assir’s fighters, although the security sources said they believed more than 20 of his men were also killed. One said Assir himself was wounded.

Lebanon’s commissioner to the military court Judge Sakr Sakr said that Assir had been summoned “to be put on trial, along with 123 of his followers, including his brother and Fadil Shaker,” a prominent Lebanese singer who abandoned his career to join Assir’s ultraconservative group.

“Come and save your people who are being massacred,” said an appeal on Assir’s Twitter account on Monday.

Sidon had been on edge since violence erupted last week between Sunni and Shi’ite Muslim fighters, at odds over the Syrian conflict which pits mainly Sunni rebels against President Bashar al-Assad, who is a member of the country’s minority Alawite sect, an offshoot of Shi’ite Islam.

Tensions escalated when the Lebanese Shi’ite militant group Hezbollah sent fighters into Syria to lead the recapture of a strategic border town by Assad’s forces.

“The army has tried for months to keep Lebanon away from the problems of Syria, and it ignored repeated requests for it to clamp down on Sheikh Ahmed al-Assir’s group,” the military command said in a statement on Sunday.

But the latest violence “has gone beyond all expectations. The army was attacked in cold blood in an attempt to light the fuse in Sidon, just as was done in 1975,” it said, referring to the year that Lebanon’s civil war began.

Assir, whose supporters accuse the army of giving cover to Hezbollah gunmen, called for people across the country to join him and demanded that “honorable” soldiers defect.

Assir has a small group of staunch supporters, believed to be in the hundreds. But many Lebanese Sunnis see him as an extremist and a trouble maker.

Lebanon’s Grand Mufti Mohammad Rashid Qabbani condemned the fighting, saying that there was never a justified reason to attack the armed forces.

Syria’s conflict has strained fragile sectarian relations across Lebanon, triggering clashes in Sidon and other cities.

In recent weeks, clashes have also rocked Lebanon’s Bekaa Valley near the Syrian border, which is home to a large Shi’ite population and also Sunni backers of the Syrian opposition.

In the northern port of Tripoli on Monday, masked gunmen cut off a main throughway and several roads around the city with cement blocks and burning tires, in a show of support for Assir.

Residents said Sunni gunmen in the Bab al-Tabbaneh district fired rockets on army positions overnight, but no casualties were reported. The militants attacked journalists who approached the areas they have blocked, breaking their cameras and threatening them not to get closer.