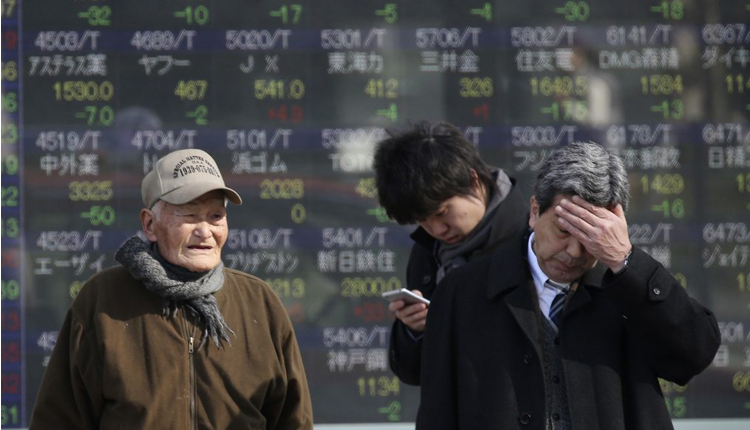 Markets in Asia declined on Tuesday, with China markets lagging the region as investors weighed an escalating trade dispute between the U.S. and China.

Japan’s Nikkei 225 traded lower by 0.09 percent at 22,317.69, but was off its intraday low of 22,104.32, as major sectors recovered after coming under pressure earlier in the day. Technology stocks were negative territory, with blue chip SoftBank Group down 2.96 percent, but banks and utilities advanced in afternoon trade.

Greater China markets recovered slightly after stumbling in the morning, although the benchmark Shanghai composite remained in negative territory. The benchmark tracked lower by 0.82 percent after trading lower by more than one percent in the morning, but the smaller Shenzhen composite turned positive, last edging higher by 0.25 percent.

Still, the Shanghai composite will end the session in bear market territory, referring to a decline of 20 percent or more from 52-week highs, if it finishes the day lower by at least 0.5 percent, according to Dow Jones.

Over in Hong Kong, the Hang Seng Index slipped 0.22 percent as all sectors but telecommunications traded lower. The properties and construction index led losses, tumbling by 1.63 percent as developers such as Country Garden sank 5.7 percent.

Other major markets in Asia also put in poor showings, with South Korea’s Kospi shedding 0.43 percent and Australia’s S&P/ SX 200 edging down by 0.29 percent. MSCI’s broad index of shares in Asia Pacific outside of Japan traded lower by 0.27 percent in Asia afternoon trade.

“There’s a risk of escalation, counter-threats and it’s political. Remember that mid-term elections [in the U.S.] are coming up. Does that remove the risk for maneuver and compromise in the U.S.? And the Chinese themselves have their own constraints … I think there’s still risk really that the debate gets away from the protagonists,” Frederic Neumann, co-head of Asian economics at HSBC, told CNBC’s “Squawk Box.”

Declines in Asia tracked sharp losses seen stateside on Monday. U.S. stocks tumbled in the last session following weekend news that U.S. President Donald Trump intends to block some Chinese companies from investing in U.S. technology. Treasury Secretary Steven Mnuchin said the investment restrictions, reported by the Wall Street Journal, were “false, fake news,” but said that the measures would apply to “all countries” instead of just China.

There were conflicting messages, however, from the Trump administration, with White House economic advisor Peter Navarro telling CNBC that there were “no plans” to impose restrictions targeting foreign investments. Stocks stateside pared some losses following Navarro’s comments.

The Dow Jones industrial average fell 1.33 percent, or 328.09 points, to close at 24,252.80. The index also ended the session below its 200-day moving average, a key technical level, for the first time since June 2016. Other major U.S. indexes also finished lower on the first trading day of the week.

European markets were weaker overnight on the back of investor concerns about trade tensions, with the pan-European Stoxx 600 losing more than two percent. Automaker stocks there took a hit after Trump last week threatened new duties on European autos.

Investors are concerned that a trade war could negatively affect global economic growth, with the intensification in trade tensions between the U.S. and its trading partners keeping markets on edge. The weaker investor sentiment is expected to persist in the immediate future, analysts indicated.

“Asian bourses are likely to remain handicapped in trading for the near term as investors prefer to de-risk into the heightened global trade war uncertainties and thinner summer trading conditions,” OCBC Bank analysts said in a note.

On the energy front, oil prices were slightly firmer after falling on Monday. Those moves came after OPEC said last week that it would increase oil production. U.S. West Texas Intermediate crude edged up by 0.25 percent to $68.25 per barrel and Brent crude futures tacked on 0.11 percent to $74.81.

In individual movers, shares of Leshi Internet Information and Technology were up ten percent in Shenzhen after news that Evergrande Health Industry Group would take a 45 percent stake in electric car maker Faraday Future. Shares of Evergrande Health were up 37.09 percent in Hong Kong.