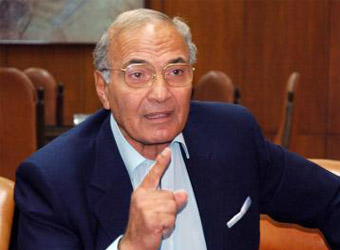 The candidate who lost Egypt’s 2012 presidential election reiterated his support Thursday for the army chief as president but also slammed the military for initially backing his candidacy openly.

Shafiq narrowly lost the election that made Morsi Egypt’s first democratically elected president, and the first civilian to take the post.

A former air force commander who was recently acquitted of corruption charges, Shafiq called Sisi the “strongest candidate who has the highest chances of winning the presidency”.

In a statement issued after the recording of a private conversation was leaked to the media, Shafiq said he was backing Sisi because he was “convinced of the need to unify our efforts and avoid a scattering of votes which is useless”.

Since ousting Morsi, Sisi has emerged as Egypt’s most popular political figure and a nationalist icon, with supporters viewing him as a tough leader who can restore stability after three years of unrest roiling the country since the fall of Mubarak in February 2011.

Support for a Sisi candidacy is evident everywhere — his image is plastered on walls, lamp posts, car windows and even on cakes in bakeries.

Sisi has made no secret of his intention to stand in the election expected this spring, but has yet to announce his candidacy officially.

Shafiq left for the United Arab Emirates following his election defeat to Morsi last year, but his supporters have said he will return to Egypt.

He has still not done so for reasons that remain unclear.

Shafiq has previously said he would consider standing for president, but only if Sisi did not.

On Thursday, he criticised the top brass and other institutions for initially backing Sisi openly.

He said it was “unimaginable and unacceptable” to see the “armed forces announcing support for Sisi’s candidacy… and some of their leaders shown on media announcing their allegiance and backing” for him.

“It goes against all rules and traditions which state that the armed forces must remain aloof from the electoral process,” his statement said.

In January, the Supreme Council of the Armed Forces announced its backing for Sisi to stand for president, saying it was the people’s will that “must be heeded” by the army chief.

Analysts say Sisi’s success as president would be crucial for the military.

“If Sisi’s success does not live up to expectations, any negative sentiment will rebound on the military itself as an institution,” said Gamal Abdel Gawad Soltan, political science professor at the American University in Cairo.

Shafiq also lashed out at what he said was “interference in the electoral process in favour of one candidate” by institutions in the country.

“(The fact that) all institutions are competing to advertise one specific candidate… has become a social disease that needs to be fought and eliminated,” Shafiq said.

Meanwhile, Sami Anan, a former army chief of staff under Mubarak, declared on Thursday that he would not stand for president after widespread speculation that he would contest the election.

Egypt to Have ‘Elected’ Leader by June: Interim President