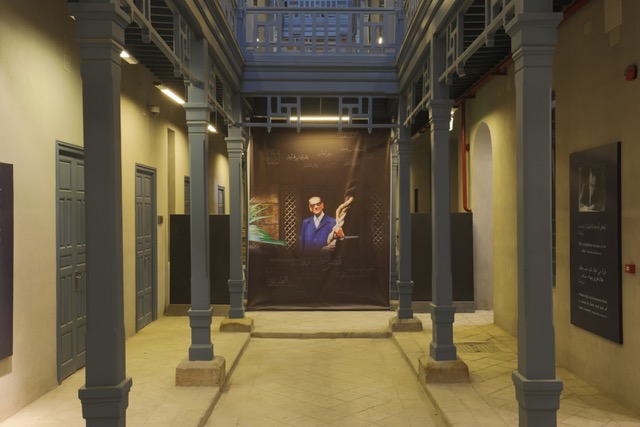 Naguib Mahfouz Museum and Creativity Center is located in the heart of Cairo to commemorate the life and works of Egypt’s Nobel laureate novelist who died in August 2006.

Naguib Mahfouz Museum is an ancient redeveloped two-floor building dating back to 1774.

Opened by Culture Minister by mid-July 2019, the museum houses personal belongings, books, and handwritten drafts and texts of Mahfouz, who won the Nobel Prize in Literature in 1988 to be the only Arab to do so.

Egyptian Minister of Culture Inas Abdel-Dayem described the museum as a new Egyptian landmark on the international cultural path.

The museum hosts Mahfouz’s medals and certificates, a collection of his personal belongings, all his works in their old and modern editions in addition to those of them translated into other languages, Abdel-Dayem said.

“Naguib Mahfouz Museum, with all its symbolism, confirms Egypt’s keenness to preserve the biography and history of its creative nationals who have formed the elements of its soft power,” she said.

A few-step outdoor staircase leads to the central hallway of the first floor, which contains a seminar room and a group of libraries with one housing researches and studies on Mahfouz’s works.

The entrance is surrounded by a large picture of Mahfouz and several signs reading quotes from his most famous novels in both Arabic and English.

The main part of the museum lies in the second floor of the old-style building, which was built by a ruler of Egypt during the Ottoman Empire as a free shelter attached to a mosque.

It contains several small halls: one has the Nobel Medal displayed in a showcase in the middle, another hosts personal belongings of Mahfouz including his suit, hat and shoes, a third screens shots of movies based on Mahfouz’s novels, a hall displays a documentary on the unique novelist, and others.