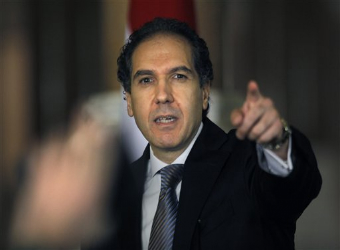 Egypt’s presidential advisor on strategic affairs Mostafa Hegazy stressed on Tuesday that the interim authorities are not in conflict with any political activists, but that those who “break the law” bear the consequences of their actions.

During a press conference held at the State Information Service’s premises in Cairo’s Nasr City district for the purpose of revealing developments in Egypt’s political scene, Hegazy said that only the judiciary can decide on the faith of those who do not abide by the law.

“Some actions are criminalized by law, in accordance with an independent judicial system that no one can interfere with,” he said.

A number of activists have recently been arrested and sentenced to prison for not complying with a contentious protest law enacted in November which stipulates that protests must be authorized by the police in advance. Unauthorized demonstrations, according to the law, are punishable by jail-time or fines.

April 6 Youth Movement co-founders Ahmed Maher and Mohamed Adel, among others, have been sentenced to three years in prison for breaking the protest law.

Many others, mainly supporters of ousted Islamist president Mohamed Morsi and his group the Muslim Brotherhood, have been detained pending trial.

Hegazy reiterated that the Brotherhood is a “terrorist organisation” and must apologize for the crimes they have committed against the Egyptian community.

Last December the Brotherhood was declared a terrorist group by authorities, only one day after a bombing at a security directorate in Nile Delta’s Mansoura killed 16. Ansar Beit Al-Maqdis, an Al-Qaeda-inspired Islamist militant group, claimed responsibility for the attack.

While the interior ministry did not provide incriminating evidence against the Brotherhood for the attack, Interior Minister Mohamed Ibrahim said that investigations proved that members of the Brotherhood were responsible for terrorist acts, some of which were deadly. The ministry also confirmed that there were links with Ansar Beit Al-Maqdis, which has claimed several terrorist attacks in Egypt since Morsi’s 3 July ouster.

“We will not bring about reconciliation with those with blood-stained hands,” Hegazy insisted.

Hegazy blamed the regime of Morsi’s predecessor, ex-president Hosni Mubarak, for first allowing the “terrorist” Brotherhood to exist. “[The Brotherhood] was like a partner to the Mubarak regime,” he said.

“But now the group and the Mubarak regime do not exist in the new Egypt,” he went on. “The Brotherhood is now in an open-ended war with the people to disturb the economy and make citizens feel unsafe. All their attempts are doomed to a failure.”

Hegazy, however, said that the Egyptian administration does not plan to “eliminate any law-abiding citizens.”

Brotherhood members and Morsi supporters have insistently called for his reinstatement, describing his overthrow, which came after nationwide mass protests, as a coup. Brotherhood rallies have usually ended in clashes with police forces and civilian opponents.

“There is no place for military or theocratic rule in Egypt,” Hegazy added.

Hegazy did not answer when asked if army chief Abdel-Fattah El-Sisi would run for president.

“Egypt is an independent state and no one can tell us what to do,” he replied. “If anyone is eligible to run for president according to the law, then we do not need to justify [his candidacy].”