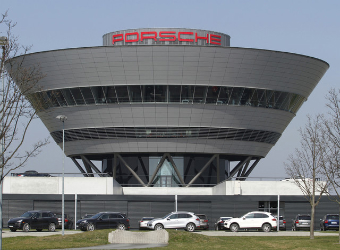 On a newly constructed bridge at Porsche AG’s growing factory in eastern Germany, a worker put up a handmade sign this summer with a tongue-in-cheek notice saying “Access to the West,” echoing Cold War language that once marked the former-communist region’s borders.

For employees at the facility in Leipzig, a city where protests helped lead to German reunification 23 years ago today, the joke was obvious. With some of the most elite cars in the world rolling off lines there and a nearby Bayerische Motoren Werke AG factory, the West has arrived.

A combined 900 million euros ($1.2 billion) in expansion at the two plants reflect how far a united Germany has come and counters moves elsewhere in Europe to scale back auto manufacturing amid the weakest sales since the end of the Cold War. With Leipzig home of BMW’s first electric car and Porsche’s upcoming Macan compact sport-utility vehicle, the former East has helped underpin the competitiveness of German carmakers by providing skilled labor at relatively low cost.

“The collapse we had to digest after 1990 was very painful, because Leipzig was dominated by heavy industry that had no place in reunited Germany,” said Burkhard Jung, Leipzig’s mayor. “Today we have a problem, which is new for us — we’re searching for skilled workers.”

As part of reunification, German carmakers poured in money to help the so-called New States develop. In addition to the Leipzig factories, Porsche parent Volkswagen AG set up a plant in Dresden to build the Phaeton luxury sedan. Germany’s biggest automaker also assembles the Golf hatchback and Passat sedan in Zwickau, builds engines in Chemnitz and makes parts in Plauen.

Daimler AG, the parent of Mercedes-Benz, manufactures engines in Koelleda and vans in Ludwigsfelde. In 2006, it set up a venture to make lithium-ion batteries in Kamenz.

The total investment helped boost production in eastern Germany more than nine fold since reunification to 626,400 cars last year, according to data from German trade group VDA. Auto-industry jobs have more than doubled to 58,600, while the number in the West has shrunk 6 percent from a 2005 peak.

“Reunification was good news for the German auto industry,” said Stefan Bratzel, director of the Center of Automotive Management at the University of Applied Sciences in Bergisch Gladbach. “Carmakers could access lower labor costs and had space for new plants. The expansion in the east is why Germany is the only country in western Europe to have added auto jobs in the past 10 years.”

While the initial wave of investment was to some extent PR, the latest expansion of the Porsche and BMW plants is driven by cold, hard economics. Porsche’s Leipzig factory beat out other sites in the Volkswagen group to build the Macan, which goes on sale next year.

“Initially, there were four possible production locations competing for the Macan — Leipzig wasn’t among them,” said Siegfried Buelow, head of the Porsche plant, who started his auto career at the maker of East German Barkas vans. “Then we worked out an offer and threw our hat in the ring.”

Leipzig got the nod after proving that it can turn out vehicles that meet Porsche standards like the best-selling Cayenne SUV and the Panamera four-door coupe, which are already made there. The plant’s bid was helped by wages of about 32,500 euros a year in the region, 36 percent less than in western Germany, according to the country’s statistics office.

There’s a lot riding on the Macan for Porsche, which makes the 911 at its home plant in Stuttgart in Germany’s wealthy southwest. The Volkswagen unit will need the SUV to be among its best sellers to reach a target of increasing sales 41 percent to more than 200,000 cars a year by 2018. The 500 million-euro investment at the factory includes an assembly hall, body shop and a stadium-sized paint shop.

BMW, which already builds the X1 compact SUV in Leipzig, started making the i3 battery-powered city car there last month and will add the i8 hybrid sports car next year. The Munich-based manufacturer is counting on the electric vehicles to make money in their own right as well as boost the desirability of its other vehicles by giving the company a green halo to help hold offAudi AG and Mercedes.

The 400 million-euro investment includes equipment to produce carbon-fiber components for the i3’s frame, which will be the first mass-produced car to be built largely with the light-weight, yet costly material.

“We are making history” in Leipzig, Harald Krueger, BMW’s production chief, said at a Sept. 18 ceremony, marking the first electric car to roll off the line. The start of i3 production represents “a milestone in BMW’s development.”

At the Porsche plant, expansion was in full swing last month. Workers were being trained on machinery to weld the Macan’s roof to the body. The manufacturer is looking for an uninterrupted seam instead of the spot welding used by most mass-market carmakers.

In the paint shop, which is made of 113,000 tons of concrete and covers an area bigger than three soccer fields, dust is meticulously removed to ensure a smooth finish. The cleaning process takes about eight to 10 weeks. As part of production preparations, strips of cassette tape hang from the ceiling to ensure air doesn’t swirl and transport particles between the stations that each apply a separate coat.

Hopes are high for the Macan, which enters a growing segment for upscale compact crossovers and will compete with the BMW X3, Mercedes GLK and Range Rover Evoque.

Sales could exceed the 50,000-vehicle target, which would mean about one in four Porsches sold worldwide in the coming years could be a Macan, said Falk Frey, a Frankfurt-based analyst at Moody’s. That would make Leipzig, where already more than half of all Porsches are made, even more crucial for the carmaker.

Even with the boon from BMW and Porsche investments, the impact of decades of communism hasn’t been entirely erased since reunification. Good jobs in the region are still hard to come by. For the 1,500 positions Porsche is creating in Leipzig, the carmaker received more than 45,000 applications, while BMW had more than 10 people applying for each of the 800 new jobs there.

The lingering marks of history are why the hand-written sign at the Porsche plant resonated with employees, who dubbed the span across the rail track where Cayenne chassis arrive, the East-West bridge after the anonymous message appeared. Global demand for German cars is helping to further fill that gap.

“Building a new plant for a completely new product that will be made by an almost entirely new team is one of the biggest challenges in the auto industry,” Oliver Blume, head of production at Porsche, said while surveying the growing factory.