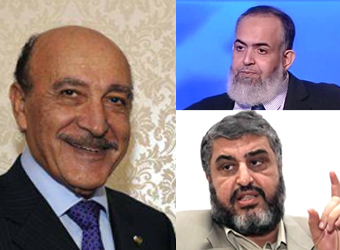 The presidential election is the climax of a transition to civilian rule being led by the military council that assumed power from Mubarak on February 11, 2011 at the height of the uprising against his three decades in power.

The generals are due to hand power to the elected president on July 1.

The disqualifications add to the drama of a transition punctuated by spasms of violence and now mired in bitter political rivalries between once-banned Islamists, secular-minded reformists and remnants of the Mubarak order.

Farouk Sultan, head of the presidential election commission, told Reuters a total of 10 of the 23 candidates had been disqualified from the race. They have 48 hours to appeal.

Hazem Salah Abu Ismail, the Salafi, was disqualified because his mother held U.S. citizenship, the state news agency reported, confirming previous reports fiercely denied by the Islamist who says he is the victim of a plot.

The Muslim Brotherhood’s Khairat al-Shater was also among those disqualified on Saturday. His spokesman said he would challenge the decision.

Omar Suleiman, Mubarak’s intelligence chief and vice president in his last days in power, would also appeal, his spokesman said.

The elimination of three of the top candidates in what is being billed as Egypt’s first real presidential vote would redraw the electoral map just a few weeks before the vote gets underway in May. The election is expected to go to a June run-off between the top two candidates.

Other front-runners include Amr Moussa, a former Arab League Secretary General and Egyptian foreign minister, and Abdul Moneim Abol Fotouh, who was expelled from the Brotherhood last year when he decided to mount his own presidential campaign.

Abu Ismail is the most hard-line of the Islamists running for the post. On Friday, his supporters besieged the headquarters of the election commission, forcing it to evacuate the premises and suspend its work. The building was guarded by security forces with riot shields.

Abu Ismail has galvanized an enthusiastic support base by mixing revolutionary zeal with ultra-orthodox Salafi Islamism.

“The presidential committee has violated all the rules of law,” Abu Ismail said in remarks published on his Facebook page. “If the official decision is to violate the constitution, they should be able to deal with the consequences,” he said.

His candidacy had been in doubt since the election commission said it had received notification from U.S. authorities that his late mother had an American passport, a status that would disqualify him from the race.

Abu Ismail followers have hit the streets in protests to warn against any move to disqualify him. He denies his mother ever held dual nationality.

In Washington, the State Department had no comment on the disqualification of the 10 candidates, including Abu Ismail.

As for the Brotherhood’s Shater, his candidacy had been in doubt due to past criminal convictions widely seen as trumped up by the authorities due to his political activities.

The Brotherhood, founded in 1928, has moved to the heart of public life since Mubarak was toppled. Anticipating Shater’s disqualification, the Brotherhood had nominated Mohamed Mursi, head of its political party, as a reserve candidate.

“We will not give up our right to enter the presidential race,” said Murad Muhammed Ali, Shater’s campaign manager.

“There is an attempt by the old Mubarak regime to hijack the last stage of this transitional period and reproduce the old system of governance.”

Shater had described Suleiman’s last-minute decision to enter the race as an insult to the Egyptians who rose up against Mubarak. Suleiman says he is running to prevent Egypt from turning into a religious state.

The state news agency said Suleiman had been disqualified due to a shortfall in the number of registered supporters from whom his campaign had gathered signed petitions.

Candidates were supposed to gather at least 30,000 signatures from at least 15 provinces. Suleiman was a thousand short in one of the provinces, the state agency said.

Hussein Kamal, a top Suleiman aide, told Reuters his campaign would also challenge the commission’s decision. “Suleiman’s campaign can finish collecting petitions if that is what is missing,” he told Reuters.