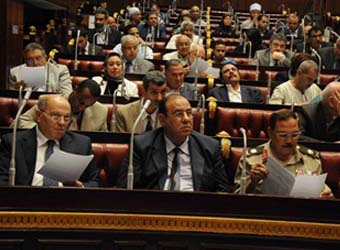 A dispute between liberals and authoritarians in Egypt’s cabinet over a law regulating public protests has laid bare cracks in the interim government appointed by the military after the coup in July.

Tension over the law, which critics say reverses many of the gains made since President Hosni Mubarak’s regime was overthrown in 2011, erupted in a shouting match between Ziad Bahaa-Eldin, deputy prime minister, and Mohamed Ibrahim, the interior minister, during a cabinet meeting. An account of the argument was splashed on the front page of a local newspaper and has been confirmed by two sources close to the interim government.

“Every one of us has to remember this day because one day people’s opinions about our government will change because of it,” Mr Bahaa-Eldin, a member of Egypt’s small Social Democratic party, was quoted as saying.

The first sign of dissent within the interim government appointed in its place was the resignation of former UN nuclear chief Mohamed ElBaradei over the violent suppression of pro-Morsi protesters in August.

Now, further disputes are appearing over proposed restrictions on freedom of assembly and association. “It marks the first time that a split in the cabinet made waves in public,” said HA Hellyer, a fellow at the Royal United Services Institute and Brookings Institution.

Critics say the proposed law reverses hard-won gains by political activists and trade unions hoping to liberalise the country’s political space. It outlaws overnight protest encampments like the one in Tahrir Square that drove out Mr Mubarak and gives the powerful interior ministry blanket authority to move, postpone or cancel street demonstrations, with the judiciary as the only channel of appeal. Both Egypt’s interior ministry and judiciary are considered strong bastions of the conservative authoritarianism under Mr Mubarak’s regime.

The protest law was endorsed by a majority of the Cabinet on October 10 and could be signed into law by interim president Adli Mansour in the coming days, but a groundswell of public hostility to the measures may lead to its withdrawal. Hazem al-Biblawi, the prime minister, said over the weekend that the government would be prepared to consider amendments to the law.

The tussle is likely a prelude to similar concerns over a new terrorism law that is expected to be presented in the coming days. State-owned newspapers reported last week that the law will include draconian measures including the death penalty for those found guilty of acts of aggression against public property that lead to fatalities.

Another controversial proposed law restricts non-profit organisations from receiving overseas funding, cutting off a major source of finance for civil society groups that advocate for victims of police abuse, the poor, women and the environment.

Under the interim government abuses of prisoners and refugees fleeing conflict zones have rocketed. Hundreds of mostly peaceful protesters have been shot dead by police and soldiers on the street, in the name of combating the threat of Islamic terrorism, and security officials have begun harassing journalists and intellectuals.

With continuing public resentment towards Mr Morsi’s Muslim Brotherhood group and support for the security forces still high in the wake of the July 3 coup, few believe that the liberals inside the Cabinet can steer the government away from its current trajectory.

“The minister of interior’s suggestions would trump anyone else’s at this point,” said Mr Hellyer. “I think that anything that the interior minister wants he gets. That’s because of the media narrative of there being a war on terror.”

Among those that have come out against the protest law are pillars of the protest movement that brought the interim government to power, including Tamarrod, or “rebellion” whose call for streets protests against Mr Morsi was heeded by millions on June 30.

“Claims that the protest law is to confront the Brotherhood is deception and a lie,” said Gamal Eid, a leftist human rights lawyer with a wide following on social media, wrote on his Twitter feed. “Laws are implemented on everybody without exception.”

But an official inside Mr Bahaa-Eldin’s political party said the dispute within the cabinet was positive, suggesting the interim government had some room to manoeuvre and is not merely a fig leaf for the armed forces and its allies in security institutions.

“I think this is the sign that this cabinet is not the cabinet of the Mubarak regime,” said the official. “It has true liberals in it that have made pragmatic decisions, and their intentions have always been good. That there is some pushback is a sign there was not a coup, that the old regime doesn’t have complete control.”