LeisureEntertainment
By Amwal Al Ghad English On May 4, 2019 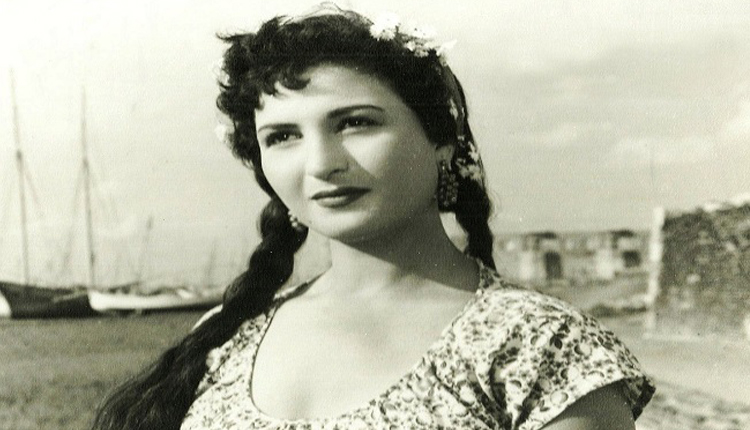 Among Egypt’s stars of the screen, none has enjoyed the combination of artistic capabilities that Naima Akef embodied; she could act, sing, dance, and she was a skilled vaudevillian performer. The cinematic legacy she left behind bears witness to this singularity.

Akef was born on 7 October in 1929 in the city of Tanta, in the Nile Delta. Her father was the owner of the famous Akef Circus, which toured during religious festivals and popular celebrations.

The circus had a counterpart, Al-Helw Circus, which provided a number of stars in this field. However, while Al-Helw Circus was distinguished in taming wild animals and performing with them, Akef Circus was proficient in acrobatics and dancing performances.

It was in this milieu that Akef was brought up, and she showed her talents young; she became the star of the circus when she was only four years old.

Due to financial and family problems, the family moved to Cairo when Akef was ten years old. The family lived in Mohamed Ali Street, which was and still is a street famous as a home to performers.

When Akef was fourteen years old she became a belly dancer and joined the Badia Masabni Company, the most famous belly dancing troupe at the time.

She then went to work as a belly dancer at the Kit Kat Casino, where the Cairene elite, including film stars and directors, used to dine.

Director Ahmed Kamel Morsi chose Akef to perform a dance in Lady of the House (1949). It was a kind of screen test, and she caught director Hussein Fawzi’s expert eye. He decided to cast her as one of the leading ladies in Breaking Bread in the same year, along with fresh face Saad Abdel-Wahab, the nephew of composer and singer Mohamed Abdel-Wahab.

Breaking Bread was a musical, a genre that Fawzi excelled at, and Akef demonstrated her artistic capabilities successfully, catapulting herself into the ranks of the major leading ladies of the time.

This coincided with her marriage to Fawzi, he forty-five years old and she only twenty.

Although the marriage didn’t result in offspring, it produced a set of excellent vaudevillian films, with Fawzi and Akef creating a successful artistic pairing. These films include Circus Girl (1951), The Tiger (1952), Tamr Henna (1957) and I Love You, Hassan (1958), which was their last film before their separation.

When Naima debuted on the silver screen in 1949, Tahia Karioka and Samia Gamal were the queens of vaudevillian. At first she competed with them, but soon she outmatched them both, although she was the youngest of the three.

Moreover, Naima’s point of distinction was her ability to sing within a performance. Furthermore, her upbringing in her father’s circus had afforded her diverse expertise in acrobatics and dancing, both in solo and group performances. As for acting, despite the fact that she was less competent than Karioka, the expert Fawzi selected roles for her that didn’t require more than good humour, vivacity and a sense of fun. This perfectly suited her to the musical films which were predominant at the time.

This explains Akef’s presence in the films of singers in that period, such as Mohamed Fawzi in How Sweet is Love (1952), Abdel-Aziz Mahmoud in Heaven and Hell (1952) and Karem Mahmoud in Delight of My Eyes (1954), among others.

Fawzi didn’t allow Akef to act with any other director than himself, except on two occasions. The first was in Four Girls and an Officer (1954) which starred and was directed by Anwar Wagdi, in return for Wagdi’s agreement to co-star with Akef in The Tiger, which was produced and directed by Hussein Fawzi. The second time was in Girls’ School (1955, Kamel El-Telmesani). The latter wasn’t one of Akef’s best films, unlike Wagdi’s film which still attracts a good audience when it is on television today.

In 1957, Akef participated in the 6th World Festival of Youth and Students in the former USSR and danced at the Bolshoi Theatre in Moscow. She won the Best Dancer in the World, surpassing dancers from Russia and Europe.

The year 1958 also witnessed the wane of Akef cinematically. After her artistic and marital separation from Fawzi in that year, she participated in five films, but her presence was faint and lacklustre. It was as if when Fawzi left her he took with him her success. These films include My Lover’s Anklet (1960, Hassan Reda) and For the Sake of Hanafi (1964, Hassan El-Seifi).

Her decline meant that she began to take on supporting roles, such as in The Newspaper Seller (1963, Hassan Al-Imam), which starred Magda.

Akef didn’t shine again except in her final film, Prince of Cunning (1964, Henri Barakat), which was a reproduction of Barakat’s Prince of Vengeance (1950) based on Alexandre Dumas’ The Count of Monte Cristo.

She acted in a total of 26 films during her career.

Perhaps her second marriage, to accountant Salaheldeen Abdel Aleem, which produced her only child, was also responsible for her decline, because she devoted most of her efforts to her son.

Following the shooting of Prince of Cunning, she fell ill from stomach cancer, and died on 23 April 1966, when she was just 36.