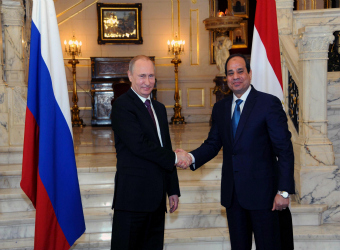 Signed 11 December in the presence of presidents Abdel Fattah al-Sisi of Egypt and Vladimir Putin of Russia, the contracts activate a $25bn Russian loan for the $30bn project to build four Russian  VVER-1200 reactors 130km from northwest of Cairo on the Mediterranean coast.

The Russian loan will cover approximately 85 percent of the plant’s construction costs, with Egypt to raise the remainder from private investors, according to a deal worked out in 2015.

The first unit is to be commissioned in 2026, Rosatom said in a press notice.

Russian businesses will benefit from the historic deal, the state nuclear developer said.

“The development of Egypt’s nuclear power industry is also important to Russia’s economy as dozens of Rosatom enterprises will be awarded significant contracts and will have an opportunity to showcase to the global community the advantage of Russian nuclear technologies,” said Rosatom’s director general Alexey Likhachev.

According to Rosatom, “several dozen” Egyptian companies will be involved in the construction project.

The VVER-1200 is described by Rosatom as a generation 3+ plant that is fully compliant with all post-Fukushima International Atomic Energy Agency requirements.

As GCR reported earlier this month, construction work has also begun on a VVER-1200 at Rooppur in Bangladesh.