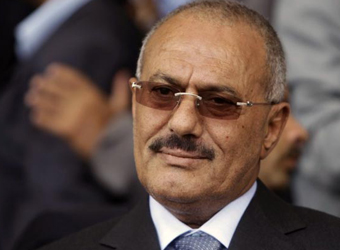 A Saudi-led coalition launched air strikes on Yemen’s capital supporting former Yemeni president Ali Abdullah Saleh after he signaled he was abandoning his support of the Iran-aligned Houthis – a shift that could pave the way to end three years of war.

In a speech on Saturday, Saleh appeared to indicate the end of his loyalists’ alliance with Houthi fighters. He said he was ready to turn a “new page” in ties with the Saudi-led coalition fighting the Houthis, if it stopped attacks on Yemeni citizens and lifted a siege.

Residents on Sunday, however, said a coalition air strike overnight killed 12 Yemeni civilians in one family in the northern province of Saada, the home territory of the Houthis. The attack could not be verified.

Separately, the Houthis, who together with Saleh’s loyalists, control most of northern Yemen, said they had fired a cruise missile toward a nuclear power plant under construction in the United Arab Emirates (UAE), a report quickly denied by the UAE.

Saleh’s announcement on Saturday was welcomed by the Saudi-led coalition, which has been backed by the United States and other Western powers.

The coalition, which includes the United Arab Emirates, is trying to help Yemen’s internationally recognized President Abd-Rabbu Mansour Hadi back to power, but it has struggled to advance against Houthi-Saleh forces. A split between Saleh’s armed allies and the Houthis could tip the balance of power.

Army units loyal to Saleh have been clashing with Houthi fighters in the past five days, adding a new layer to an already complex situation in Yemen.

Minister of State for Foreign Affairs Anwar Gargash appeared to back Saleh’s side in remarks on his official Twitter page.

“The events in Sanaa are murky, but its national uprising needs support … to protect the Arabian Peninsula from Iranian expansion,” he said.

Residents in Sanaa reported on Sunday that the Houthis appeared to be clawing back some territory lost to Saleh over the previous four days, and Houthi tanks were deployed amid heavy gun battles in the city’s central Political District.

The area is a stronghold of Saleh’s loyalists under the command of his nephew Tareq, an influential army general.

The fighting has cut off the airport road, prompting the United Nations to try to evacuate at least 140 aid workers from Sanaa, according to U.N. and other aid officials. The U.N. was awaiting approval from the Saudi-led coalition, they said.

Residents earlier said Houthi fighters seized the television studios of Yemen Today, a news channel owned by Saleh, after clashes that damaged the building. Residents said 20 employees were trapped inside.

The Red Cross said dozens of people have been killed in clashes over the past five days and called for civilian lives to be spared.

In Tehran, Iranian Foreign Ministry spokesman Bahram Qassemi called for calm and restraint. “All internal disputes should be resolved through dialogue to block the grounds for any abuse by the enemies of the Yemeni nation,” he said, according to a statement on the ministry’s website.

Yemen is one of the poorest countries in the Middle East, and the proxy war between the Iran-aligned Houthis and the Saudi-backed Hadi has created widespread hunger and disease, in one of the worst humanitarian crises of recent times.

Yemen descended into violence in late 2014 when the Houthis, a group that follows the Zaidi branch of Shi‘ite Islam, marched on Sanaa and seized control of the government.

Backed by government troops loyal to Saleh, the Houthis fanned out across the country, forcing Hadi to flee to Riyadh. His ouster led the alliance headed by the Saudis to join the fighting.

The Houthis said the missile fired on Sunday was directed toward the al-Barakah nuclear power plant in Abu Dhabi, but provided no evidence of any attack.

There were no reports of any missiles reaching Abu Dhabi. The country’s crisis management authority said the al-Barakah was well protected and urged the public not to listen to rumors.

Hope for resolution to Qatar dispute may buoy Gulf

UK’s May to meet key EU figures for Brexit talks