Entertainment
By Yomna Yasser On Feb 6, 2017 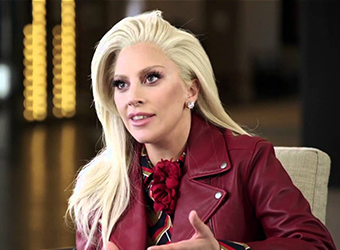 Lady Gaga jumped off the roof of Houston’s NRG stadium and bathed in the light of hundreds of drones, but her Super Bowl show was fairly restrained.

The star only changed costume twice, letting her music do the talking in 12 minutes, hit-laden set.

She opened with Woody Guthrie’s civil rights anthem this Land Is Your Land, a gentle but pointed rebuke to Donald Trump’s administration- which she reinforced by performing Born This Way- her hymn to acceptance and inclusion.

“No matter black, I was born to be brave,” she sang to an expected U.S. TV audience of 110 million.

But Gaga refrained from overt sermonising, simply saying: “We’re here to make you feel good.”

Ahead of the Super Bowl, the star said that her show would be inclusive and celebrate the spirit of equality.

Sponsors Pepsi simply said it would be uniquely Gaga.

While she didn’t hatch from an egg- as at the 2011 Grammy Awards- or smear herself in 2009’s Monster Ball tour, it was certainly spectacular.

Gaga first appeared 79 metres above the crowd, as a swarm of drones hovered behind her; twinkling in the sky before adopting the colours of the stars and stripes during Woody Guthrie’s left-wing anthem.

“One nation under God, indivisible, with liberty and justice for all,” said the star, who promptly did a swan-dive from the roof, landing on a towering, torch-like structure several stories below.

She launched into a dizzying medley of hit singles including Poker Face, Just Dance, and Telephone, backed by an army of dancers.

Her vocals were strong and resonant throughout, although the intricate choreography left her out of breath for the set’s sole ballad, Million Reasons.

Fans who flooded the pitch were given torches that flashed in time to the music, spelling out lyrics and making elaborate, coordinated patterns.

Mark Chapman, Sport presenter, revealed that the entire stadium- including his commentary booth and the public toilets- had been plunged into darkness to make the visuals work on television.

Finishing the show atop a staircase, Gaga shouted Super Bowl 51, dropped her microphone and jumped into the crowd holding a glittery silver football.

“This is for you Monsters, the star tweeted to her fanbase. I love you,” Chapman said.

The last time the Super Bowl was held in Houston the half time performer was Janet Jackson, whose infamous wardrobe malfunction made the NFL wary of hiring young, edgy pop stars for several years.

Gaga posed no such problems, taming her worst excesses to deliver a streamlined, spectacular show that reminded many fans why they love her.

While her performance lacked the political punch of Beyonce last year; or even a gif-able meme like Katy Perry’s left shark, there wasn’t a single mis-step or misfiring moment.

The star was invited to play the half time show after singing the National Anthem at the 50th Super Bowl in California last year.

she had studied the greats, name-checking Michael Jackson, Diana Ross, and Bruce Springsteen, before beginning work on her show in September.

“I want every guy’s girlfriend in his arms; I want every husband and wife kissing; every kid laughing,” she told Radio Disney last year.

“In my mind they’re having this really powerful family experience watching the Super Bowl,” she said.

The drone light show required special permission from the Federal Aviation Authority – which had established a 34.5-mile-radius no-drone zone around the stadium during the game for safety and security reasons.