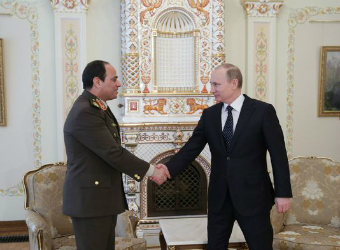 Defense Minister Sisi, along with Foreign Minister Nabil Fahmy, returned from the Russian capital of Moscow Thursday after a two- day visit which he described as “a new start for military and technical cooperation.”

“The visit shows that Egypt is heading toward Eastern powers after the United States and Europe suspended their aids to the country following the ouster of Islamist President Mohamed Morsi last July,” said Saeed al-Lawindi, a political expert at Al-Ahram Center for Political and Strategic Studies.

Sisi’s popularity has been growing since Morsi’s removal, with a lot of voices calling him to run for president in the upcoming elections.

During the visit, Russian President Vladimir Putin expressed his support for Sisi’s bid for presidency, saying that “this is a very responsible decision.” It was seen as a strong and the clearest message that showed Moscow’s desire to expand its military relations with the U.S. ally in the Middle East.

Lawindi said the visit also reflected the eagerness of Egypt to create “balanced ties with all world powers, particularly Moscow, Beijing and Washington.” He added that there were still a large amount of weapons in the Egyptian army coming from Russia although the two countries’ relations declined sharply under the ruling of former Egyptian Presidents Anwar Sadat and Hosni Mubarak.

“This does not mean that Moscow or Beijing will be alternatives to Washington,” the expert said, noting Egypt realized the significance of having balanced relations with big powers instead of decades of “dependence” on the United States.

Although the visit was apparently meant to conclude a two- billion-U.S. dollar weapon deal with Russia, which would be financed by Saudi Arabia and the United Arab Emirates, it would surely help alleviating Western pressures on Egypt, he said.

The United States did not bless Morsi’s military removal and has been calling for a dialogue between all Egyptian parties to resolve the ongoing conflict, including the Muslim Brotherhood that was recently blacklisted by the Egyptian interim government as “a terrorist organization.”

Washington suspended part of its annual aid of 1.3 billion dollars and sales of four F-16 jet fighters to Egypt following Morsi’s removal that strained the Egyptian-Western relations in general and Egypt-U.S. ties in particular.

Last August, the military chief slammed U.S. administration for “disregarding the Egyptian people’s will” and “turning its back on Egyptians,” referring to U.S. support for the Muslim Brotherhood.

The U.S. congress approved a bill that would unfreeze the military aid to Egypt, but only on the condition that the army- backed authorities ensure democratic reforms.

Talaat Musallam, a strategic and security expert and a former armed forces general, described Sisi’s visit to Russia as a kind of strategic “maneuver,” arguing that it was normal for Egypt to work on enhancing relations with other powers.

“It may give Washington an impression that Egypt has means to face Western pressures,” Musallam told Xinhua, noting that the visit was also meant to “increase Egypt’s capabilities to face the current challenges including its ongoing war against terrorism.”

Musallam echoed Lawindi’s opinion that Sisi’s visit signaled Egypt’s adjustment in its foreign policies with an aim to pursue a more balanced relations with the world.

In late August, Foreign Minister Fahmy told Xinhua that the interim government would focus more on improving its multilateral ties with the Arab and African nations, but not at the expense of its friendship with countries in other regions.

It did not mean that Egypt will disregard relations with Washington, Musallam said, but create a balance in Egypt’s relations with armament powers across the world.

Street Art – Over The Web And Into The Gallery