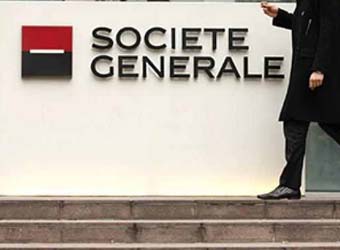 Societe Generale rose as much as 5.9 percent in Paris trading after saying net income rose to 955 million euros ($1.27 billion), exceeding the 668 million-euro average forecast of six analysts surveyed by Bloomberg. Revenue at the corporate- and investment-banking unit rose 38 percent from the previous year.

Societe Generale, led by Chief Executive Officer Frederic Oudea, is selling assets and has cut hundreds of jobs in investment banking to comply with stricter capital rules designed to ensure the financial crisis of 2008 is not repeated. In May, it announced 900 million euros of cost reductions through 2015 to restore profitability.

“What we are doing in terms of profitability and capital ratios is really going in the right direction at a quick pace,” Oudea said in a Bloomberg Television interview after the earnings were published. The bank’s core Tier 1 capital ratio will be “close to” 10 percent by year’s end and a rights issue is “not at all” needed, he said.

Societe Generale said its leverage ratio, or common equity as a proportion of total assets, will exceed 3 percent by the end of the year, the minimum level set by global regulators for the start of 2018, under the current understanding of Basel committee rules. It didn’t provide a figure for the ratio should the calculations be enhanced as many analysts predict.

The core equity Tier 1 ratio under Basel III, another key measure of banks’ financial strength that is based on risk-weighting of assets, was 9.4 percent at the end of June, a gain of 73 basis points, or 0.73 percentage point, from the end of March, Societe Generale said. The ratio will increase to more than 9.5 percent by year-end, it said.

Regulators are questioning the risk weightings banks apply to their assets, which are typically set by the lenders’ own models, and calling for inclusion of the more simplified measure of leverage that ignores risk.

BNP, which is planning to expand in markets such as Germany and the Asia-Pacific region, had a leverage ratio of 3.4 percent at the end of June, based on core Tier 1 capital.

Societe Generale’s equities-trading business benefited from “strong revenues on flow equity derivatives” in Asia and from “sustained commercial activity on structured products,” it said in a presentation.

Trading in fixed-income, currencies and commodities had seen “growing demand from retail and institutional clients on structured products,” the bank said.

Societe Generale had 84 million euros in second-quarter net income from its private banking and investment-management services unit, compared with a 129 million-euro loss in the previous year, when it booked a 200 million-euro markdown on a U.S. asset-management unit.

Now French lenders are seeking to counter the impact of the European economic slump. President Francois Hollande’s government is prodding banks to lend more to help France emerge from a recession, while cutting them some slack on other fronts. French banks were spared a split of lucrative investment-banking activities from other operations as lawmakers passed a bill last month to segregate proprietary trading, the first such move in Europe.

Net income at Societe Generale’s French retail banking unit fell 11 percent to 319 million euros in the second quarter, it said. That surpassed the 301 million-euro average estimate of five analysts. Revenue rose 1.6 percent to 2.07 billion euros while provisions for doubtful loans were at 274 million euros, a 29 percent increase from a year ago, it said.

Societe Generale (GLE)’s second-quarter net income from Russia was 10 million million euros, rebounding from a year-earlier loss of 271 million euros caused by a writedown at its Moscow-based unit OAO Rosbank (ROSB), the bank said. Societe Generale serves about 5 million Russian clients, its second-biggest market after France, and is among a declining number of Western banks keeping a presence in Russia after rivals such as Barclays Plc (BARC) andHSBC Holdings Plc (HSBA) left.

In June, Societe Generale pledged to keep growing its Russian business as it sought to move beyond the May arrest of Rosbank’s former head on bribery charges. It said in June that it aims to achieve return on equity of more than 15 percent in Russia by 2015.

Societe Generale’s corporate center, which includes the group’s property portfolio, its banking and industrial equity holdings and treasury functions, had a net loss of 78 million euros compared with a year-earlier 138 million-euro profit, the bank said. The division booked 100 million euros in litigation provisions, it said.

U.S. to Go Ahead With Joint Military Exercise in Egypt