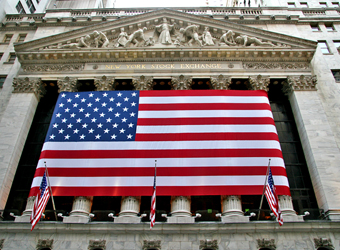 The Dow Jones industrial average closed about 25 points lower, with Boeing and McDonald’s contributing the most losses. The index has closed lower in six of the past seven sessions.

“You’ve got a new uncertainty factor,” said Mike Bailey, director of research at FBB Capital Partners, referring to Trump’s policy proposals. “I think we’re going to see some choppiness until the market gets used to this new president’s communication style.”

The S&P 500 fell around 0.25 percent, with energy and industrials leading decliners.

“This is about the anxiety over Trump and how fast he moves on his campaign promises,” said Peter Cardillo, chief market economist at First Standard Financial. “It’s now saying ‘show me,’ because much of this is already priced in.”

“The slowdown really started on Friday with Trump’s comments,” said Robert Pavlik, chief market strategist at Boston Private Wealth, referring to President Trump’s inaugural speech, which contained protectionist rhetoric. “The market slowed down a bit from there and that carried over into today.”

The three major indexes briefly turned positive on Monday after Trump doubled down on one of his central campaign promises: deregulation.

Trump said Monday he believes his administration can cut regulations by 75 percent or “maybe more.” “We’re going to be cutting regulation massively,” he told reporters.

“Investors are still giving Trump the bullish benefit of the doubt,” said Adam Sarhan, CEO at 50 Park Investments. “We’ve had every chance to fall significantly, but we haven’t.” He added however, policy expectations are “going to have to be met at some point.”

Stocks in the U.S. rallied following the presidential election on hopes of corporate tax cuts, government spending and the deregulation of certain sectors.

“People need to be patient and the market needs to be patient,” said Randy Warren, chief investment officer at Warren Financial. “As we get more clarity, the market is going to trade as if [Trump’s policies] are reality.”

“If it becomes clear that these things aren’t going to happen, then that’s a whole new ball game,” Warren said.

The dollar, which also rallied after Nov. 8, has given up some of its post-election gains, hitting a six-week low against a basket of currencies. The euro, in turn, advanced 0.39 percent to $1.074 and the Japanese yen soared 1.25 percent to 113.1.

“The growing threat of Donald Trump’s proposed fiscal stimulus failing to keep up with market expectations may ensure Dollar weakness becomes a recurrent theme in the short term. While further Dollar selloffs may be expected as markets scale back on fiscal stimulus speculations, the prospects of higher US interest rates this year should limit losses in the medium to longer term,” Otunuga said.

President Trump signed an executive order announcing his intention to withdraw from the Trans-Pacific Partnership (TPP), a trade agreement among 11 other Pacific Rim countries.

Trump is also expected to sign another executive order that will put in motion the renegotiation of the North America Free Trade Agreement (NAFTA).

McDonald’s beat analyst expectations on both the top and bottom line. Halliburton, meanwhile, beat bottom-line estimates but sales came in light of expectations. Yahoo is expected to post results after the close on Monday.

There will be several S&P 500 components reporting throughout the week, including tech giants Microsoft and Google-parent Alphabet.

There are no major economic data due Monday, but investors will receive fourth-quarter GDP data on Friday.

The Dow Jones industrial average fell 27.40 points, or 0.14 percent, to 19,799.85, with General Electric lagging and Home Depot the biggest advancer.

About five stocks advanced for every four decliners at the New York Stock Exchange, with an exchange volume of 754.7 million and a composite volume of 3.113 billion at the close.

The CBOE Volatility Index (VIX), widely considered the best gauge of fear in the market, traded near 11.8.

On tap this week:

Gold steady as unease with Trump policy weighs on dollar