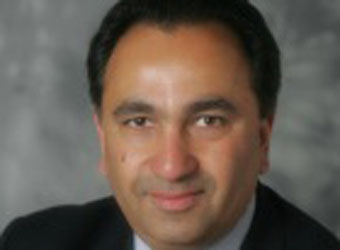 The financial messaging service for most international money transfers has told U.S. officials it is prepared to cut off Iran’s central bank, according to people involved in the talks, an action that would be a blow to Iran’s already battered economy.

The Society for Worldwide Interbank Financial Telecommunication, known as Swift, dispatched its top lawyer to Washington for discussions this week in response to proposed U.S. legislation targeting Swift and its board, whose chairman is Yawar Shah of Citigroup Inc. and deputy chairman is Stephan Zimmermann of UBS AG.

Swift’s general counsel Blanche Petre said the Belgium- based service is prepared to expel Iranian institutions sanctioned by the European Union as well as Iran’s central bank, according to aides to U.S. lawmakers who met with Petre and spoke on condition of anonymity because of the sensitivity of the issue.

A spokeswoman for Swift, JoAnn Healy, declined to comment on private meetings involving its officials.

Acting against the Iranian institutions would be “a very serious step, disruptive to the users, but also to the financial community as a whole,” Healy said today in an e-mailed response to questions. “It is a complex situation that needs to take into consideration the implications to the functioning of the global payments system, as well as to the continued flow of humanitarian payments to the Iranian people.”

The Obama administration, which has imposed more sanctions on Iran than any nation or past U.S. administration, has expressed wariness about the unintended consequences of expelling all Iranian entities from Swift, according to the aides to lawmakers. Treasury Department and White House officials declined to comment on discussions with Swift and EU authorities.

By including Iran’s central bank, Swift’s proposal goes further than lawmakers or the administration sought, and might roil oil markets on concern that buyers will be unable to pay the second-largest producer in the Organization of Petroleum Exporting Countries for its 2.2 million barrels a day of oil exports.

“This is the financial equivalent of warfare,” Avi Jorisch, a former U.S. Treasury official, said in an interview. “The administration is very concerned about anything that would spike oil markets. Cutting off Iran’s central bank from Swift would do just that, but at same time, it would deal a knockout blow to Iran’s ability to use the international financial system.”

In its 39 years, Swift has never expelled any institution from the cooperative of 10,000 member banks and organizations in 210 countries. Swift transmits an average of 17 million financial messages a day, facilitating trillions of dollars in cross-border payments, officials said. According to its annual report, 19 Iranian member banks and 25 financial institutions sent and received 2 million messages through Swift in 2010.

Swift authorities said Feb. 17 they were prepared to comply with any new EU regulations instructing them to expel sanctioned Iranian entities. EU officials say regulations for financial messaging services should be ready within weeks. If Swift expels all EU-sanctioned Iranian institutions, the pending U.S. legislation may be amended or shelved, congressional aides said.

Mark Dubowitz, executive director of the Foundation for the Defense of Democracies in Washington, said he believes Swift is seeking “political cover to do something unprecedented” that might set an unwanted example for governments to press for the expulsion of other members.

Trevor Houser, an energy analyst and partner at Rhodium Group, a New York-based economic research firm, said in an interview that “expelling Iran’s central bank from Swift would complicate Iran’s ability to receive payment for the crude oil it exports and could accelerate a reduction in Iranian supply more quickly than Western officials would like to see in the interest of keeping oil markets in balance.”

“U.S. and EU officials have a tough needle to thread: They’re trying to reduce Iranian revenue while preventing a spike in global oil prices,” said Houser, a visiting fellow at the Peterson Institute for International Economics in Washington. “Blunt instruments like removing Iran’s central bank from Swift risk making that process even harder to manage than it already is.”

Houser said Iran would still be able to set up bank accounts at the same financial institutions as oil buyers, allowing them to process payments intra-bank, without the need for a messaging system. Iran might also send messages through Telex or e-mail, or accept payment for oil through other means.

Dubowitz said he is concerned that expelling Iran’s central bank from Swift might complicate legal trade in food, medicine and oil. He recommended EU regulators and Swift work closely with the U.S. to minimize the risk of an oil price spike.

“If the central bank can be expelled from Swift while allowing permitted oil trades to occur through other legal mechanisms, I would fully support its expulsion,” he said.

“There is little point in driving 20 percent reductions in Iranian oil exports if global oil prices then increase by 30 percent,” he said. “That will only enrich Iran’s Supreme Leader Ali Khamenei while plunging the rest of us into an oil- led recession.”