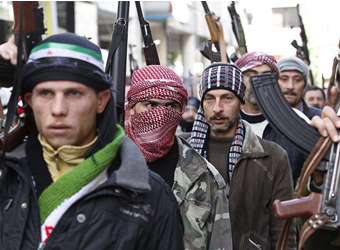 Rebel factions in Syria that backed recent peace moves say an intensification of government attacks has put the current truce in jeopardy.

They warn that they reserve the right to respond to recent bombings of areas around Damascus, Homs and the south.

The rebels describe the attacks as a bloody message from President Bashar al-Assad’s government.

This comes just days before UN-sponsored talks are due to start in Geneva, Switzerland.

The UN envoy to Syria, Staffan de Mistura, has played down hopes for the talks on 23 February.

He said the talks were aimed at seeing if there was any possibility of starting to discuss a political process.

A nationwide ceasefire brokered by Russia, Turkey and Iran took effect on 30 December after peace talks in Kazakhstan.

At least 16 people were killed in government shelling of an area near Damascus on Saturday, monitors and medical workers said.

Casualties were also reported in other rebel-held parts of the country.

There were also reports of rebel shelling of government-controlled areas in Damascus.

These reports have not been independently verified.

More than 300,000 people have been killed and 11 million others displaced since the uprising against Assad began in March 2011.