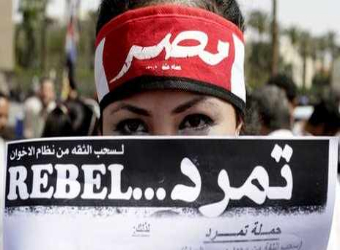 Egypt’s Tamarod (Rebel) movement announced late Saturday that the memberships of three of its founders have been frozen after they violated the movement’s decision to back Field Marshal Abdel-Fattah El-Sisi in the upcoming presidential elections.

The decision came after the three announced their support for presidential candidate Hamdeen Sabbahi during a press conference on Saturday where the Nasserist leader officially announced that he is running in the coming electoral poll scheduled in Spring 2014.

Tamarod, widely credited for mobilising for the ouster of Mohamed Morsi in July 2013, has thrown its weight behind El-Sisi in December, 2013 — if he runs in the presidential elections.

While the army general  has not yet officially announced his presidential candidacy, he is widely expected to be Egypt’s next president. The Supreme Council of the Armed Forces empowered him to run for the top position last week.

Meanwhile, in an interview with Al-Ahram Arabic news website, Refaee Nasrallah, founder of the pro-Sisi Kamel Gemeilak campaign vowed to sue Shahin after he allegedly accused the campaign during Saturday’s press conference of being funded by members of the former Mubarak regime.

Kamel Gemeilak was founded to urge El-Sisi to run for the presidency.

Nasrallah further added that he saw the backing of Sabbahi by the Tamarod members as “fishy.”