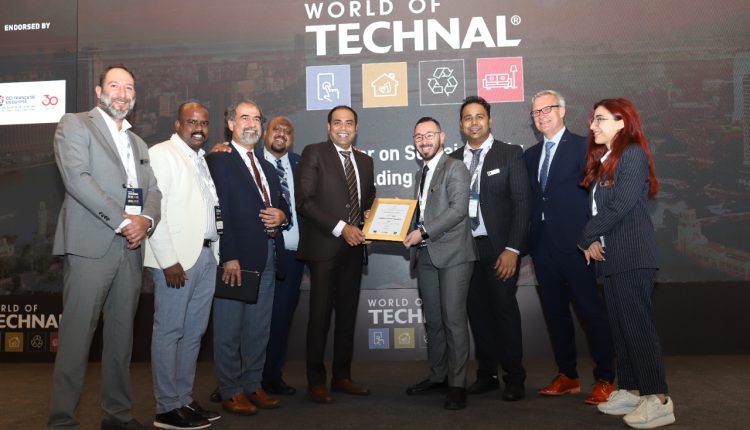 French brand Technal®️, a subsidiary of Norwegian multinational giant Hydro – a pioneer supplier of Aluminum systems for doors, windows, and building facades, has launched on Monday its latest product Hydro CIRCAL in Egypt.

The new product is the world’s first certified minimum 75 percent post-consumer recycled aluminum for doors windows and building facades, the company said in a statement.

Technal®️ held its fifth regional seminar for the first time in Cairo under the title World of Technal, themed around sustainability and building envelopes.

Robinson praised the Egyptian building, development and construction march, which shows that the North African country is walking the talk when it comes to climate change and sustainability issues.

“This encouraged Technal®️ to launch its fifth conference to focus on sustainability and building facades to be part of the Egyptian interest in this vital issue and within the preparations to host the COP 27 Climate Summit in Sharm ElSheikh later this year.” said Robinson.

He also said Technal®️ is working with local partners to formulate the needs of the Egyptian market to tailor its strategy to fulfil it.

The company is working on several projects in Egypt including the New Magdy Yacoub Hospital in the 6th of October City, one of the New Alamain towers, New Giza University’s headquarters, and the new office of the El Araby Group in Cairo, he added.

Robinson further said that the Magdy Yacoub Hospital project would be using use windows, doors, and facades from Hydro CIRCAL. This means that this project alone will reduce carbon emissions by 776 megatons, which is equivalent to the work of 776 trees for 80 years purifying the air we breathe, and all this is at no additional cost to the project, he explained.

“This is the right and responsible choice that expresses how Egypt talks and works at the same time to save and protect the environment and resources.” concluded Robinson.

Haby Yaqob, Sales Manager for Egypt, Kuwait, and the UAE, said that the technology provided by Technal®️ provides many innovative and dynamic solutions to the Egyptian market.

“I have been based in Cairo for more than a year now, I’m currently establishing our new Cairo offices to continue coordination with our local partners instead of the older model running the business from the Gulf headquarters, and that’s to cope with the unprecedented growth in the Egyptian Real estate development.” Yaqob added.

He further said the market for European aluminum systems in Egypt exceeds €30 million/ annum, and that Technal®️ aims to acquire a 10 percent market share by 2025.

He expressed Technal®️’s confidence in the Egyptian economy. The multinational group Hydro is moving in with investments and partnerships in the coming period to keep pace with the steady growth in the Egyptian construction and development movement, especially in New Cairo, the new administrative capital, New Alamein and Giza Governorate, he added.

Answering a question about the rise in costs of building requirements, Yaqob said that Technal ®️ products are readily available in the Egyptian market, and that in times of crisis like the current war, this might incentivise multinationals to move in and set up local production plants to bypass import costs. This will positively impact the industry as a whole like what happened in the glass manufacturing sector which now runs with 80 percent of local inputs for its production, he added.

Yaqob explained the importance of sustainability in buildings saying that the initial cost might be 5-10 percent higher, but the running costs of such buildings are considerably lower, and these savings on maintenance, depreciation and energy bills, add up every day the building is at work.

Mohamed Talaat, one of the leading architects who participated in the conference, said that there are 13 elements of sustainability that need to be taken into consideration in order to reduce operational costs and reduce waste of resources. He added that architecture speaks out the identity of the country and its civilization even after hundreds of years, and this does not stop at how the building looks like, but transcends that to sustainability, green building, functionality, and creativity.

He further said that modern and efficient design of building envelopes using the correct elements contributes to reducing energy bills by rates of up to 40-50 percent. This is as a result of reducing the cost of cooling and heating and the efficiency of insulation, in addition to the other advantages of sound and dust proofing, distribution of natural lighting, aesthetic and functional elements, and others.

Fabian Hecker, Associate Director of Zaha Hadid Architects, a speaker at the seminar praised Technal®️ for organising such an event with a focus on sustainability. Hecker added that Zaha Hadid Architects worked on mega projects in Egypt between 2005 and 2010, but these projects were discontinued after 2011.

“We are currently expecting and eager to be back to work in the Egyptian market.’’ Hecker concluded.