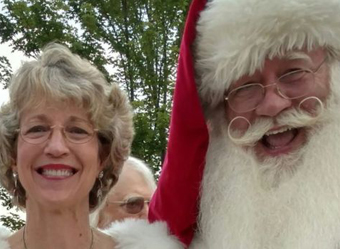 A US man who dresses up as Santa Claus fulfilled a dying boy’s Christmas wish by visiting him at his bedside, before the youngster passed away in his arms.

Eric Schmitt-Matzen rushed to a local in Tennessee hospital after receiving a call about a terminally ill five-year-old boy who wanted to see Santa Claus.

The 60-year-old impersonator said he gave the child a present and a big hug before holding him as he died.

The boy’s family watched on from the hallway as they cried, he told the BBC.

“When I felt the life go from him, I looked up, tears running down my face, and looked over at the window and that’s when mom started screaming,” he said.

Mr Schmitt-Matzen said he had asked family members to remain outside the room if they were going to break into tears when he arrived for the visit.

“I have to be the happy guy that makes this kid feel great and smile and forget his worries,” he said.

The Santa doppelganger, a mechanical engineer and president of Packing Seals & Engineering in Jacksboro, was born on Saint Nicholas Day (6 December) and has played the role professionally for six years.

His wife, Sharon, also dresses up as Mrs Claus.

While some Santas have gone 30 or 40 years without ever paying a death bed visit, Mr Schmitt-Matzen said he has four times.

“The little guys and girls have a hard time fathoming the whole concept of death, but they know Christmas and they know they have a lot of fun” he said.

“He [the boy in the latest case] was more concerned about missing Christmas than he was about dying. All he knew was he didn’t feel good.”

Mr Schmitt-Matzen said he gave the boy a toy from the television show PAW Patrol that his mother had purchased.

The boy asked him where he was going after he died, and Mr Schmitt-Matzen told him he was “Santa’s Number One elf” and he would be welcomed.

The child then sat up to give his visitor a hug and he asked one final question: “Santa, can you help me?”

Moments later, he passed away in Mr Schmitt-Matzen’s arms.

“It’s still tough to relive,” he told the BBC.

When asked if he would continue to put on the red suit, Mr Schmitt-Matzen said: “If somebody calls I’ll do it. It hurts, but I’ll do it.”