Thomas Cook: demand is picking up for Egypt holidays 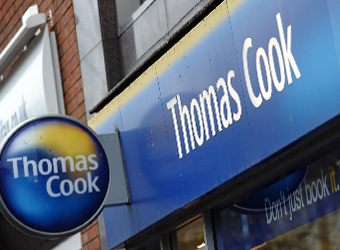 British travel group Thomas Cook announced Thursday that demand for holidays in Egypt is picking up again, after unrest in the North African nation had pushed holidaymakers into choosing rival sun spots.

Thomas Cook said the improvement, along with especially strong demand for bookings to Greece, is helping to offset persistent weakness for holidays in Turkey, which last year suffered an attempted coup and deadly bombings.

The update came as Thomas Cook announced flat revenues and losses for its first quarter, or three months to the end of December.

“Continued reductions in bookings to Turkey have been more than offset by strong demand for Greece,” the company said of its holidays for summer 2017.

“We have also grown bookings significantly to a number of smaller European destinations including Cyprus, Bulgaria, Croatia and Portugal, and we have seen a strengthening of demand for Egypt and Morocco.”

Thomas Cook, along with other UK travel groups and airlines, last year cancelled flights to the Egyptian resort of Sharm el-Sheikh.

This was after the crash of a Russian airliner near the Red Sea holiday destination in late 2015 that killed all 224 people on board.

Investigators have concluded it was downed by a bomb and the Islamic State group has claimed responsibility.

The UK Foreign Office meanwhile is sticking to its advice of warning Britons “against all but essential travel by air to or from Sharm el Sheikh”.

Thomas Cook typically posts a loss during its first half ahead of the peak demand season coinciding with the northern hemisphere summer season.

“Key will be the summer season coming up, when the real money is to be made,” said Neil Wilson, senior market analyst at ETX Capital.

“Bookings are already nine percent ahead of last year, which ought to offer some comfort.”

Laith Khalaf, senior analyst as stockbroker Hargreaves Lansdown, said the good news for Thomas Cook was that its recent tough trading period does not appear to be worsening.

“Like-for-like revenues and losses were broadly flat on last year, which probably represents a small victory against such a competitive backdrop,” he said.

“Times are tough in the European travel industry,” Khalaf added in a client note.

In early deals, shares in Thomas Cook tumbled by about 6.0 percent, sending it to the bottom of London’s second-tier FTSE 250 index, as investors found only small comfort in the group’s outlook.

Apple’s Cook on Trump immigration ban: Steve Jobs was the son of an immigrant