Trump hits back at Clinton, with a golf ball, on Twitter 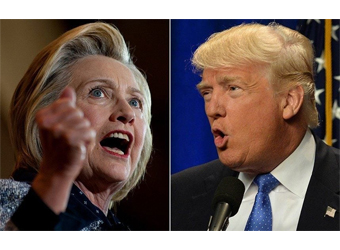 U.S. President Donald Trump on Sunday retweeted a doctored video of himself taking a golf swing and hitting former Democratic presidential rival Hillary Clinton, who then stumbles as she boards a plane.

Clinton had been back on the Republican president’s Twitter feed in recent days as she promoted “What Happened,” her new book about the 2016 presidential election, with Trump resuming his campaign attack of “Crooked Hillary.”

The video, retweeted by several users, shows Trump on a golf course hitting a ball before segueing to the doctored shot of a golf ball hitting then-Secretary of State Clinton in the back as she is boarding a plane. The original video of Clinton, from 2011, does not show a golf ball.

“Crooked Hillary Clinton blames everybody (and every thing) but herself for her election loss,” he said. “She lost the debates and lost her direction! The ‘deplorables’ came back to haunt Hillary. They expressed their feelings loud and clear. She spent big money but, in the end, had no game!”

White House spokeswoman Sarah Sanders said later that day that Clinton was pushing “false narratives” in the book. Clinton admits mistakes during the campaign in the book but gives a harsh account of factors she believes led to Trump’s victory, including alleged interference by Russia on his behalf and former FBI Director James Comey announcement that investigators were looking at a new trove of emails related to Clinton.

Clinton, who has been giving a series of interviews promoting the book, responded to Trump’s earlier criticism on Twitter with a suggestion that he read her earlier book, “It Takes a Village,” a picture book for children.

A senior Democrat, U.S. Representative Adam Schiff, said the retweet did not make him question Trump’s recent outreach to Democrats but was disturbing.

“It is distressing, though, to have a president that frankly will tweet and retweet things as juvenile as that,” Schiff said on ABC’s “This Week” program. “It doesn’t help, I think in terms of his stature, it doesn’t help in terms of the stature of our whole country.”