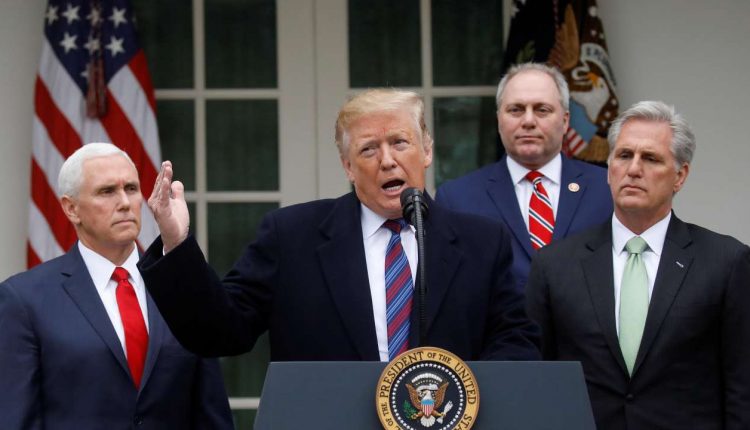 U.S. President Donald Trump proposed an immigration deal on Saturday in a bid to end a 29-day partial government shutdown, including temporary protections for “Dreamers” and other immigrants, but Democrats immediately dismissed it.

Insisting on his demand for $5.7 billion to fund a U.S.-Mexico border barrier as part of any bill to fully reopen the government, Trump sought to pile pressure on Democrats by appealing to immigrants they have tried to help.

In a speech from the White House, Trump offered three years of protections for young undocumented immigrants known as “Dreamers,” as well as for holders of temporary protected status (TPS), another class of immigrants.

Decrying what he called a “badly broken” U.S. immigration system, Trump said, “I am here today to break the logjam and provide Congress with a path forward to end the government shutdown and solve the crisis along the southern border.”

But the protections he proposed fell far short of the path to citizenship for Dreamers that Democrats and some Republicans in Congress have been urging for years.

In a statement after Trump’s speech, Senate Republican Leader Mitch McConnell called the plan a “bold solution to reopen the government, secure the border, and take bipartisan steps toward addressing current immigration issues.”

A spokesman for McConnell said he would seek Senate passage of the proposal next week.

Democrats insisted talks on border security occur only after the government is reopened. Senate Democratic Leader Chuck Schumer said, “It was the president who singled-handedly took away DACA and TPS protections in the first place. Offering some protections back in exchange for the wall is not a compromise but more hostage taking.”

Even before Trump spoke, House of Representatives Speaker Nancy Pelosi said his offer as reported in advance was “unacceptable,” did not “represent a good-faith effort to restore certainty to people’s lives,” and was unlikely to gain the votes needed to pass the House or the Senate.

About a quarter of the U.S. government has been partially shut down since Dec. 22, as funding has expired for reasons mostly unrelated to the border or immigration.

WORK WITH NO PAY

Some 800,000 federal workers have been staying home on furlough or working without pay.

Trump has refused to consider legislation needed to fully reopen the government unless it includes $5.7 billion to help pay for a border wall or other barrier, which he says is needed to keep out illegal immigrants and drugs.

The full cost of such a barrier could eventually top $24 billion, according to some government estimates.

The Dreamers, mostly young Latinos, are protected from deportation under the Deferred Action for Childhood Arrivals (DACA) program, which protects certain people who illegally entered the United States as children. It provides about 700,000 immigrants with work permits, but no path to citizenship.

Vice President Mike Pence told reporters Trump’s proposal for the Dreamers and border humanitarian assistance was based on conversations with rank-and-file Democrats.

He said Trump hopes millions of Americans will pressure Democrats to go along with the deal. Pence said conservatives should not worry that Trump is providing amnesty to Dreamers, saying, “This is not an amnesty.”

“We hope once people get past the initial statements and initial reaction, when they really look at this legislation, when it comes to the floor of the Senate, they’ll see it as an effort by the president to take ideas from both parties,” said Pence.

White House chief of staff Mick Mulvaney said declaring a national emergency on the border to fund a wall without congressional approval remained an option but was not Trump’s preferred solution.

“Can the Democrats separate themselves from the extreme left and work out a compromise on border security? I think a lot of members want to do that,” Mulvaney said.

Former President Barack Obama put DACA in place in 2012 through an executive order. Most of his fellow Democrats since then have sought more lasting protection for the Dreamers. The Trump administration said in September 2017 it would rescind DACA, but it remains in effect under court order.

Temporary Protected Status (TPS) is given to nationals from designated countries affected by armed conflict, natural disaster, or other strife. TPS holders are permitted to work and live in the United States for limited times.

The Trump administration has shown a deep skepticism toward the TPS program and has moved to revoke the special status for immigrants from El Salvador, Haiti, Honduras and other nations.

Polls showed Americans increasingly blame Trump for the shutdown, the 19th since the mid-1970s. Most past shutdowns have been brief. The current one has had no impact on three-quarters of the government, including the Department of Defense, which has secure funding.