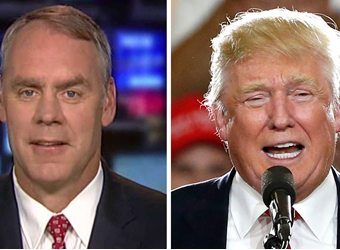 Zinke, 55, a member of the House Natural Resources Committee who’s described as an avid hunter and fisherman, was an early and consistent supporter of Trump’s presidential campaign and was re-elected to a second term last month as Montana’s sole representative in the House.

If Trump carries through with the appointment, Zinke’s nomination would have to be confirmed by the Senate.

The Interior Department oversees management of about three-quarters of federal land and natural resources, along with programs relating to American Indian and territorial affairs.

Zinke is a strong supporter of coal, oil and gas exploration and development with a 3 percent rating from the League of Conservation Voters, an environmental advocacy group. But he is also described as an enthusiastic outdoorsman, and he has backed increased funding to preserve open spaces.

At a congressional campaign debate in 2014, Zinke hedged when he was asked whether he believed climate change was real. He said that it wasn’t a hoax but that it also wasn’t “proven science.”

In a statement Tuesday, the environmental group Greenpeace called Zinke a “climate change denier” whose “real constituency is the fossil industry and coal companies.”

But he has also bucked some general Republican policies by backing increased funding to preserve open spaces and opposing the transfer of public land to the states.

Another lawmaker widely believed to have been up for the position, Rep. Cathy McMorris Rodgers, R-Washington, ran into fierce opposition from environmental advocates who were angered by her introduction of legislation to sell off public lands.

McMorris Rodgers also met Monday with Trump. She didn’t address reports that she was under consideration, telling reporters only that “we talked about a lot of things” and that “it was great to spend time with him.”

Zinke, who is also a member of the Armed Services Committee, is a highly decorated retired Navy SEAL who served as acting commander of the Combined Joint Special Operations Task Force in the Arabian Peninsula, leading Special Operations personnel in Iraq.

In an interview Monday on MSNBC’s “Morning Joe,” Zinke talked at length about his support for Trump’s nomination of retired Gen. James Mattis to be defense secretary, calling him the right man for the job.

As late as Tuesday afternoon, Zinke was still hiring staffers for his congressional offices.