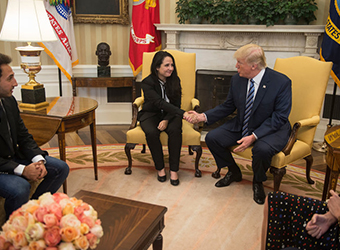 U.S. President Donald Trump welcomed on Friday Aya Hegazy, an Egyptian American aid worker detained for three years in Egypt, to the Oval Office after quietly working to secure her release this week.

“We are very happy to have Aya back home and it’s a great honor to have her in the Oval Office,” Trump said during a brief photo opportunity less than 24 hours after a government plane landed with her at an Air Force base outside of Washington.

Hegazy, who holds dual American and Egyptian citizenship and attended George Mason University in Virginia, was arrested in Egypt in 2014 on charges of child abuse and human trafficking.

Human right groups had mocked the charges against Hegazy and her husband, who worked at the Beladi Foundation, a nonprofit organisation that she founded to care for street children in Cairo. Her case had become a symbol for the treatment of aid workers by the government of Egyptian President Abdel Fattah al-Sisi.

Trump’s administration swiftly claimed credit for working behind the scenes to free Hegazy and other aid workers. Charges against the workers were dropped in an Egyptian court last Sunday.

Sean Spicer, the White House press secretary, said Trump directed his national security team weeks ago to work on securing her freedom. Spicer said the president talked privately about her case when he met with Sisi at the White House this month.

“We’re just pleased that she’s back home,” Spicer said. “The president and the team successfully worked to have her brought home.”

The Oval Office meeting between Trump and Sisi was an abrupt warming in the relationship between the two countries and may have contributed to Hegazy’s release. Former President Barack Obama had refused to allow Sisi to visit the White House because of concerns about his human rights record since assuming power in a military takeover in 2013.

Spicer and other government officials declined to be specific about what actions Trump’s government took to get the charges dropped.

The verdict in Hegazy’s case was originally scheduled to be heard on March 23, but it was postponed at the last moment until last Sunday, raising the possibility that Sisi might have accepted the warm White House embrace in exchange for a prisoner who was about to be freed by the court system anyway.

It was also unclear whether pressure from other sources, including many members of Congress, might have helped to persuade Egyptian authorities to release Hegazy.

And while her case had become a focus of international attention, it was not representative of the cases of many aid groups in Egypt that have been shuttered, prosecuted or had their assets frozen by the Sisi government in the past year.

Hegazy’s American citizenship and the child abuse charges against her were unique, leading some human rights organisations to worry that other jailed aid workers are unlikely to win release in the same way.

Spicer deflected questions about the details of the Trump administration’s efforts, but said that officials worked directly with their counterparts in Sisi’s government.

“The national security team, in particular, was working through diplomatic channels to folks in the al-Sisi government,” Spicer said. “Most of this was directly tied to his staff and his actions.”

Saudi Arabia to award licences to 15 U.S. firms in May: officials