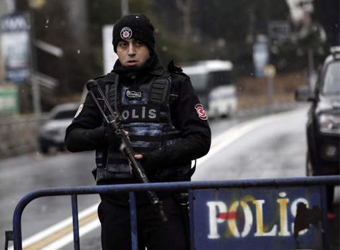 The gunman who killed 39 people at an Istanbul nightclub fired up to 180 bullets, Turkish media report.

More details are emerging of the attack at the upmarket Reina nightclub where hundreds of revellers were celebrating the new year early on Sunday.

The unidentified assailant arrived by taxi before rushing through the entrance with a long-barrelled gun he had taken from the boot of the car.

The motive is unclear but suspicion has fallen on the Islamic State (IS) group.

IS has already been linked to at least two attacks in Turkey last year.

The attacker fired indiscriminately at people, starting with a security guard and a travel agent near the entrance. Both were killed.

The assault lasted seven minutes and the gunman is reported to have removed his overcoat before fleeing during the chaos.

A manhunt is under way, Interior Minister Suleyman Soylu confirmed. “We hope the attacker will be captured soon.”

President Recep Tayyip Erdogan accused groups such as IS of trying “to create chaos”.

“They are trying to… demoralise our people and destabilise our country,” he added.

The banned Kurdistan Workers’ Party (PKK) has distanced itself from the killings, with the PKK’s Murat Karayilan quoted as saying it would “never target innocent civilians”.

As the search continued, the first funerals were held on Sunday.

At least 25 of those killed were foreign, according to local media, among them citizens from Israel, Russia, France, Tunisia, Lebanon, India, Belgium, Jordan and Saudi Arabia.

The club, which sits on the banks of the Bosphorus, is one of Istanbul’s most chic venues – popular with foreigners and often frequented by singers and sports stars.

Security guard Fatih Cakmak was among the first to die.

His brother said he narrowly escaped a double bombing three weeks ago, having been on duty when Kurdish militants launched an attack near a football stadium, killing at least 44 people, mostly police.

At least 69 people are being treated in hospital, officials said, with three in a serious condition.

Istanbul was already on high alert with some 17,000 police officers on duty in the city, following a string of terror attacks in recent months.

30 July: 35 Kurdish fighters try to storm a military base and are killed by the Turkish army

28 June: A gun and bomb attack on Ataturk airport in Istanbul kills 41 people, in an attack blamed on IS militants

13 March: 37 people are killed by Kurdish militants in a suicide car bombing in Ankara

17 February: 28 people die in an attack on a military convoy in Ankara