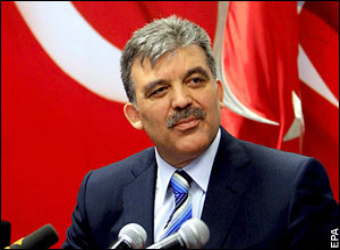 Turkish President Abdullah Gul has noted on the Egyptian decision withdrawing ambassador to Ankara saying, “I hope our relations will again get back to its track.”

A statement by Egyptian Foreign Ministry said, “Egypt’s government has denounced recent remarks by Turkish prime minister on 21 November on the Egyptian local affair ahead of leaving Moscow. The remarks represent new series of his statements which reflect unaccepted insistence on challenging the great Egyptian people’s will, ignoring its legal choice and intervention within local issues, besides including fabrications and reversing truth since 30 June.”

“In appreciation toward historic relations with Turkish people, Egypt was keen on giving more than chance to the Turkish leadership so it would use mind and raise interests of both countries and peoples above narrow ideological and partisan interests. However, that leadership continued its unaccepted and unreasoned stances trying to reverse the international society against Egyptian interests and supporting meetings by groups that seek creating status of instability in the country, beside making statements that could at least be described as insults against people’s will which was embodied on 30 June,” the statement added.

“Regarding the ongoing unaccepted way by the Turkish leadership, Egypt decided on Saturday reducing its diplomatic representation in Turkey to charge d’affaires level and transferring Egypt’s ambassador to Turkey to the Foreign Ministry in Cairo, bearing in mind he was summoned to Cairo on 15 August for consultations,” the statement said.

The statement concluded saying, “People and government of Egypt assures its appreciation toward Turkish people and blames the Turkish government for consequences of what bilateral relations had reached, which urged taking such procedures.”

In a press conference in Cairo on Saturday, abdel Aaty added that the Turkish community in Egypt are welcomed,”We hope that interests and rights of Egyptians in Turkey are not affected.”

Asked about difference between dealing with Turkey and Tunisia and reasons of returning the Egyptian ambassador to Tunisia,abdel Aaty said, “There s a great difference between the two cases. Tunisia is an Arab country that we have links of common identity with.” He referred to an earlier meeting between Egyptian and Tunisian foreign ministers on the sidelines of Arab foreign ministers at the Arab League.

“We earlier mentioned there was understanding on summoning the Egyptian ambassador to Tunisia given that we hope there would be progress in relations between the two countries and peoples. For the Turkish case, it’s frequent as mentioned in the ministry’s statement. It hosted groups that seek destabilizing Egypt. There were stances and attempts by Ankara with international parties to internationalize the Egyptian affair, which was then foiled,” he added.

Abdel Aaty mentioned that chances were given through the Turkish ambassador to Cairo, which urged measures by Egypt toward the ongoing Turkish stances.