U.S. stocks on track for worst one-day fall since 1987 crash

U.S. stocks witnessed on Thursday a historic decline as investors dumped equities after remarks from President Donald Trump failed to quell fears over the possible economic slowdown due to from the coronavirus.

In his remarks, Trump announced travel from Europe will be suspended for 30 days as part of his administration’s response to the coronavirus outbreak. Trump also announced that the administration would provide financial relief for workers who are ill, caring for others due to the virus or are quarantined.

These steps were not specific enough for investors and even those who were seeking a more robust fiscal response to curb potentially slower economic growth driven by the coronavirus.

“President Trump in an extraordinary Oval Office address didn’t offer up major new ideas on stimulus and only said he’d propose a vague payroll tax holiday to Congress without strongly standing up for any firm size/magnitude,” wrote Ernie Tedeschi, policy economist for Evercore ISI, in a note received by CNBC.

“This effectively kicks the issue to Congress which is still planning to go on recess next week.” Tedeschi added.

The Dow Jones Industrial Average plunged nearly 9 percent, or around 2,000 points and was on track for its biggest one-day percentage fall since the market crash of 1987, when it collapsed by more than 22 percent. This is the sixth-worst fall reported for the Dow in history. Even the worst one-day fall of 2008 financial crisis did not reach this magnitude.

The S&P 500 pushed down 7.7 percent, joining the Dow in a bear market on Thursday trading. The main U.S. stock benchmark is now down 25 percent from its record set just last month. The Nasdaq Composite dived 7.5 percent. 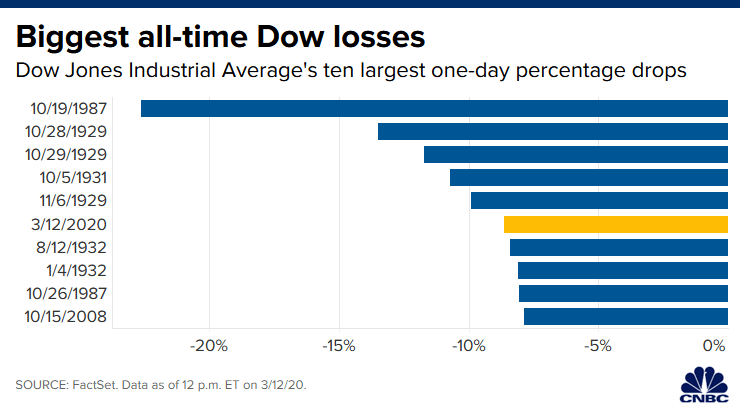 As a result, the trading was halted briefly after the open for 15 minutes as markets hit the mandated “circuit-breaker” threshold used by U.S. exchanges. However, not much was immune to the market crash. Small-cap benchmark the Russell 2000 index fell by 10 percent. Gold plunged and oil dived.

“After what’s been happening the last few days, we are going to see a spread of economic sudden stops.” El-Erian said.

“The trouble with economic sudden stops is it’s not easy to restart an economy,” he added. El-Erian believes the selling won’t end until the bear market hits down 30 percent.