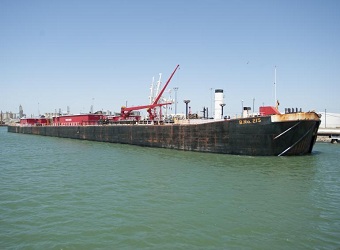 U.S. crude broke a four-day losing streak in thin trade on Friday, but posted a weekly loss as concerns persisted over an excess of crude.

About 225,000 WTI contracts had changed hands, lower than average.

Oil has been on the back foot for more than two weeks now, after a string of U.S. inventory reports suggested that output cuts by the Organisation of the Petroleum Exporting Countries (OPEC) were not having the desired effect in reducing global oversupply.

On Thursday, however, a Saudi energy ministry official told Reuters that crude exports to the United States in March would fall by around 300,000 barrels per day (bpd) from February and hold at those levels for the next few months.

The official said the expected drop, in line with OPEC’s agreement, could help draw down U.S. inventories that stood at a record 533 million barrels last week, stocks that have in part remained buoyant because of reduced seasonal refining runs.

But data from tanker tracking firm ClipperData suggests the decline will only be temporary and Saudi exports to the United States could return to normal levels as soon as April.

“Our projections do not support the comments coming out of Saudi Arabia,” Matt Smith, ClipperData’s director of commodity research, told CNBC.

The OPEC kingpin’s exports to other regions, notably Asia, remained elevated despite the OPEC-led deal that includes other producers like Russia to cut output by 1.8 million bpd during the first half of the year.

Unless OPEC extends the curbs beyond June or makes bigger cuts, traders say oil prices are at risk of falling further.

“OPEC’s goal of drawing down inventories to normal levels is not going to be reached before their agreement expires on June 30,” said U.S. investment bank Jefferies in a note to clients.

Many are now watching for whether OPEC, whose committee monitoring the cuts will meet over the weekend in Kuwait, will extend the deal.

In Russia, private oil producers are ditching their skepticism and lining up behind an extension of output cuts after previous oil price increases compensated for lost income.

In the U.S., shale drilling has pushed up oil production by more than eight percent since mid-2016 to just above 9.1 million bpd, though producers have left a record number of wells unfinished in Permian, the largest oilfield in the country, a sign that output may not rise as swiftly as drilling activity would indicate.