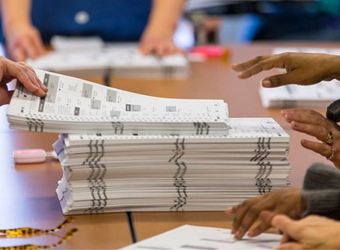 The US Green Party led by Jill Stein has changed its strategy in seeking a state-wide recount in Pennsylvania.

The campaign says it will go to the federal courts, hours after dropping an appeal in a Pennsylvania state court.

The party had earlier said voters could not afford the $1m (£785,000) bond ordered by the state court.

Ms Stein has tried to force recounts in Michigan and Wisconsin as well; all three were narrowly won by President-elect Donald Trump.

The Greens’ decision comes two days before a court hearing was scheduled on the case in Pennsylvania where Donald Trump’s margin of victory was 49,000, or less than 1%.

But supporters of Mr Trump are trying to block the recount bid, which are unlikely to change the polls results if they take place.

“Make no mistake, the Stein campaign will continue to fight for a state-wide recount in Pennsylvania,” recount campaign lawyer Jonathan Abady said in a statement. “We are committed to this fight to protect the civil and voting rights of all Americans.”

Mr Abady said barriers to a recount in Pennsylvania are pervasive and the state court system is ill-equipped to address the problem.

Ms Stein, who was the Green Party’s presidential candidate, says the recount bid is needed to explore whether voting machines and systems had been hacked and the election result manipulated.

But her campaign has so far offered no evidence of hacking, and supporters of Donald Trump have asked the state court to dismiss the case.

• According to federal law, all recounts have to be concluded within 35 days of the election, which is 13 December

• All three states account for 46 votes in the Electoral College, enough to tip the election to Mrs Clinton if they moved from Mr Trump’s total to hers – but this is viewed as highly unlikely

• For Mrs Clinton to be declared victor would require a swing of more than 100,000 votes across three states – a move that would dwarf all previous recount results

A recount has already started in Wisconsin, which Mr Trump won by 22,000 votes. On Friday, a federal court rejected a request by Mr Trump’s supporters to immediately halt the recount there, but allowed a lawsuit to proceed.

In Michigan, Mr Trump’s team filed a complaint with the elections board to block a recount of all 4.8 million ballots cast in the state, which he won by 10,700 votes. A recount there could begin next week.

Mrs Clinton, who lost to Mr Trump, has kept silent on the matter, but her campaign has said it would co-operate with Ms Stein’s recount efforts.