US ‘Shocked’ by Egypt Death Sentences 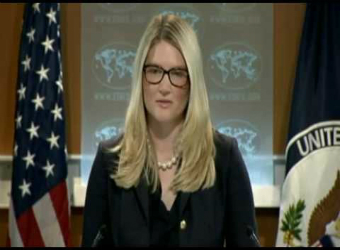 The United States expressed shock Monday after an Egyptian court handed down death sentences against 529 supporters of Egypt’s deposed president Mohamed Morsi after a two-day trial.

An Egyptian court handed down the sentences earlier Monday, amid a sweeping crackdown on supporters of the Islamist president, who was overthrown by the army last July.

“We are deeply concerned — and, I would say, actually pretty shocked — by the sentencing to death of 529 Egyptians related to the death of one policeman,” said Marie Harf, deputy US State Department spokeswoman.

Harf questioned whether the defendants could have received a trial in accordance with international norms.

“Obviously the defendants can appeal, but it simply does not seem possible that a fair review of evidence and testimony consistent with international standards could be accomplished with over 529 defendants in a two-day trial,” Harf said. “It sort of defies logic.”

The largest mass sentencing in the country’s history was related to the death of a policeman and other violence in the aftermath of the clearing of two squares last August.

Harf said the United States was raising the issue of Monday’s sentences with the Egyptian government.

“We continue to call on the Egyptian government to ensure that all those detained in Egypt are afforded fair proceedings that respect civil liberties and due process and are consistent with international standards. The law must be applied equitably and free of political bias,” the State Department official said.

“We have said many times that even the appearance of politically-motivated arrests, detentions, and convictions will set Egypt’s transition back,” the official added.

The official, citing reports of violence in response to the sentences, warned that such a reaction would not help either.

The United States partially suspended its $1.5 billion in annual aid to longtime ally Egypt, much of it to the military, after last summer’s crackdown on the opposition.

Since then, it has regularly criticized the new interim government for the slow transition to democracy and its poor record on human rights and public liberties.

But the US administration has never declared Morsi’s overthrow a coup, and even US Secretary of State John Kerry has contended that the army acted as it did to save democracy.

Harf said the United States would continue to engage Egypt in future, saying Washington regarded its links with Cairo as an “important relationship” and there was no desire to “completely cut off” relations.

However the US would stand up for principles “that include things like right to a free and fair trial that we will continue pushing with the Egyptian government.”