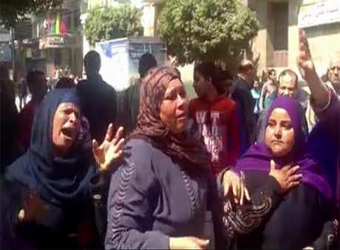 A member of the defence team representing the 529 defendants handed a mass death penalty on Monday has said that his team will appeal the verdict, the largest of its kind in the history of Egypt’s criminal courts.

Ahmed Shabib, a Muslim Brotherhood lawyer, said on Monday that defence lawyers would bring the appeal after receiving the reasoning behind the court’s ruling.

Shabib added that he and his fellow lawyers would request a retrial for the defendants sentenced in absentia.

On Monday, an Upper Egyptian court in Minya sentenced 529 supporters of deposed president Mohamed Morsi to death on charges of murdering Mostafa El-Attar, deputy commander of the Matay district police station, who was killed during riots in the aftermath of the violent dispersal of two pro-Morsi sit-ins in August.

The court also acquitted 16 other defendants after it was proved that they had helped save another officer from being killed.

Only 147 defendants were present at the hearing. The remaining defendants have been released, set free on bail or still remain at large.

Shabib told Ahram Online that the 45-minute court session, held amid a heavy security presence, had not been attended by either the defendants or their defence team.

He added that a request to change the judge overseeing the case’s first session on Saturday had been turned down by the court.

The defendants’ papers will be handed over for inspection to the office of the Grand Mufti, the country’s official authority for issuing religious edicts, as per Egyptian law which stipulates that all death sentences be reviewed by the Mufti for ratification.

The court has set 28 April as the date the final verdict will be issued.

Meanwhile, Mohamed Tosson, a Brotherhood leader and a member of the defence team, said that only 22 defendants are members of the Brotherhood.

Tosson further slammed the verdict as being “the fastest and most bizarre in the history of Egyptian judiciary.” He added that the judge did not grant time for the defence team to present its case, which he says is a violation of Egypt’s criminal procedures law.

“This verdict is void under the criminal procedures law, under the penal code and under the recently ratified constitution,” said Tosson, adding that the verdict only aims to intimidate the Brotherhood.

A statement issued by the Brotherhood accused Egypt’s interim authorities of using the judiciary to launch “a genocide” against protesters.

“These verdicts will only make the revolutionaries more determined to topple the coup,” added the statement.

Monday’s sentence was criticised by the Lawyers’ Syndicate, which announced that it would hold a press conference on Tuesday to clarify the violations present in the verdict.

US ‘Shocked’ by Egypt Death Sentences