US Suspends Military Cooperation with Russia, Kerry Heads to Ukraine 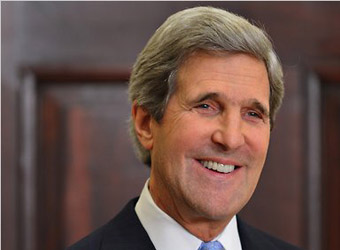 The United States suspended military cooperation with Russia due to its military intervention in Ukraine, as Secretary of State John Kerry prepared to visit Kiev Tuesday amid a deepening crisis.

“We have, in light of recent events in Ukraine, put on hold all military-to-military engagements between the United States and Russia,” Pentagon spokesman Rear Admiral John Kirby said in a statement Monday.

The crisis now threatens to blow up into the biggest test for global diplomacy — and relations between Moscow and the West — since the fall of the Berlin Wall in 1989.

Kirby stressed that the suspended system had been “developed over the past few years to increase transparency, build understanding, and reduce the risk of military miscalculation”.

Both Washington and the European Union said they were looking at a range of sanctions against Russia for its threat to use force against an ex-Soviet neighbour for the first time since a brief 2008 conflict with Georgia.

The West’s warnings to Moscow came shortly after Ukrainian defence officials on the flashpoint Crimean peninsula said Russia had given its forces an ultimatum to surrender or face an all-out assault.

“The ultimatum is to recognise the new Crimean authorities, lay down our weapons and leave, or be ready for an assault,” regional Ukrainian defence ministry spokesman Vladyslav Seleznyov told AFP in the Crimean capital Simferopol.

But a spokesman for the Russian Black Sea fleet based in Crimea told the Interfax news agency the claim was “complete nonsense”.

World markets plunged and oil prices spiked on fears of an all-out offensive that would pit nuclear-armed Russia against its Western-backed neighbour.

Kiev’s new Western-leaning leadership is due to receive a morale boost Tuesday when Kerry meets with the new Ukrainian leadership and parliament to “reaffirm the United States’ strong support for Ukrainian sovereignty, independence, territorial integrity”, the US State Department said.

The hastily arranged trip reveals growing alarm at the events in Ukraine.

NATO is also to hold an urgent meeting on Tuesday at Poland’s request, after the neighbour of Ukraine raised concerns about its own security in light of the crisis.

The world’s richest nations have already threatened to strip Moscow of its coveted seat at the Group of Eight industrialised nations for menacing its ex-Soviet neighbour.

But Europe and Washington appear to have limited options in dealing with Putin — a veteran strongman with mass domestic appeal who has cracked down on political freedoms and appears more interested in rebuilding vestiges of the Soviet Union than repairing relations with the West.

“Europe is without doubt in the worst crisis since the fall of the Wall,” said German Foreign Minister Frank-Walter Steinmeier.

US President Barack Obama used some of his strongest language yet on the escalating crisis on the eastern edge of Europe, where three months of protests culminated in a week of carnage that claimed nearly 100 lives and led to the ouster of pro-Russian president Viktor Yanukovych — now sheltering in Russia.

The US leader said the Kremlin had put itself “on the wrong side of history” by mobilising forces in Ukraine’s strategic Black Sea peninsula, which has housed the Russian Black Sea Fleet since the 18th century.

“I think the world is largely united in recognising the steps Russia has taken are a violation of Ukrainian sovereignty… a violation of international law,” Obama said.

The US leader added that he had told Russia that it could face isolation unless it changes course.

Predominantly ethnic Russian Crimea has come under de facto occupation by Moscow-backed forces who have taken control of government buildings and blocked Ukrainians troops inside their barracks across the peninsula.

“All military bases in Crimea are blocked,” a defence ministry spokesman told AFP. “They are surrounded.”

The tensions set off another frenzy of global diplomatic activity.

In New York, the UN Security Council held its third round of emergency talks on the crisis in four days, in a meeting called by Russia to set out its position in greater detail.

The Kremlin’s envoy to the United Nations told the gathering that it was the ousted Yanukovych who had formally asked Moscow to deploy troops in Ukraine.

“People are being persecuted for language and political reasons,” Russian ambassador Vitaly Churkin said, quoting from a letter claimed to have been sent by Yanukovych on Saturday.

“So in this regard I would call on the president of Russia, Mr Putin, asking him to use the armed forces of the Russian Federation to establish legitimacy, peace, law and order, stability and defending the people of Ukraine,” he read.

Churkin’s address provoked a stinging rebuke from the British, French and US ambassadors who said Russia was fabricating excuses to justify its violations of international law.

In Brussels, EU foreign policy chief Catherine Ashton said ahead of talks with Russian Foreign Minister Sergei Lavrov in Madrid on Tuesday that the 28-nation bloc would “consider targeted measures” against Moscow.

A special European summit has been called for Thursday.

The first business day since Russia’s shock move a step closer towards an invasion of Ukraine saw markets from Asia to Europe and New York nosedive and the Moscow exchange ended the day down nearly 11 percent.

Russia’s central bank unexpectedly hiked its main interest rate to 7.0 percent from 5.5 percent in a bid to halt a meteoric ruble slide that saw it hit record lows again the dollar on Monday.

An IMF team was due to arrive in Kiev on Tuesday on a 10-day fact-finding mission to consider the new government’s request for $15 billion in assistance this year.

US lawmakers said they would introduce a “critical” economic support package to Ukraine authorising $1 billion in loans.

Tony Blair Arrives in Cairo for Second Visit in 2014